DENVER (AP) — A wealthy dentist accused of fatally shooting his wife in the heart with a shotgun at the end of an African safari was found guilty of murder and mail fraud on Monday.

A jury of six men and six women reached the verdict for Lawrence “Larry” Rudolph following a three week trial and a day and a half of deliberations. 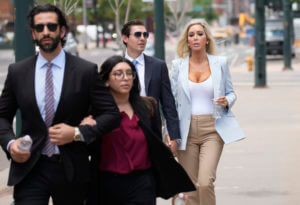 FILE – The son, left, and daughter, back right, of Pittsburgh dentist Lawrence “Larry” Rudolph head into federal court for the afternoon session of the trial, July 13, 2022, in Denver. Rudolph accused of shooting and killing his wife in their cabin at the end of an African safari trip has denied that he killed her. Rudolph took the stand Wednesday, July 27, 2022, at his murder trial in Denver federal court. (AP Photo/David Zalubowski, File)

Rudolph, 67, was charged with foreign murder in the 2016 death of Bianca Rudolph in Zambia as well as mail fraud for cashing in $4.8 million in life insurance claims in what prosecutors describe as a premeditated crime. Some of the money was paid out of Colorado so he was tried in Denver federal court.

He faces a maximum term of life in prison or the death penalty when he is sentenced in February.

Rudolph maintained his innocence and the two adult children he had with his wife sat in court to support him during the trial. One of Rudolph’s defense attorneys, David Markus, said they would appeal his conviction.

The defense suggested Rudolph’s wife of 34 years, a nervous traveler, shot herself while trying to pack a shotgun in a hurry as they prepared to return from Zambia to the United States in 2016.

But prosecutors countered that evidence showed that was impossible because the wound to her heart came from a shot fired from 2 to 3.5 feet (60 centimeters to 1 meter) away.

The couple’s longtime hunting guide, Mark Swanepoel, told investigators that Rudolph had unloaded the shotgun the day before the fatal shooting, but Rudolph testified that he could not remember if he had or not.

When he returned home to Phoenix days later, Rudolph said he put the shotgun in his garage not wanting to look at it. Then sometime in 2018, as he was preparing to sell his house and before he found out the FBI was investigating his wife’s death, he said he took the gun apart, put it into two cardboard boxes and paid a man cash to haul it away with along with other trash.

Prosecutors also accused Rudolph’s girlfriend and the manager of his Pittsburgh-area dental franchise, Lori Milliron, of lying to a federal grand jury and being an accessory. 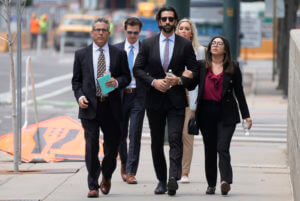 Defense attorneys for Pittsburgh dentist Lawrence “Larry” Rudolph head into federal courthouse with the dentist’s children for the afternoon session of the trial, Wednesday, July 13, 2022, in Denver. (AP Photo/David Zalubowski)

Rudolph waved to Milliron as he was led out of court and back to jail after not having any interaction with her in the courtroom in previous days. Milliron will remain free with an ankle monitor until she is sentenced.

Prosecutors alleged that Rudolph decided to kill his wife to regain control over his life after Bianca Rudolph asked for more say in the couple’s finances and demanded that Milliron be fired. Rudolph said his wife agreed to have an open marriage and the defense argued there was no financial incentive for Rudolph, who was worth about $15 million at the time, to kill his wife.

Investigators in Zambia and for the insurers concluded her death was an accident. Prosecutors noted that Rudolph hung up on an insurance investigator who tried to speak with him and declined to participate in a voluntary interview with an FBI agent.

Colorado’s U.S. Attorney Cole Finegan thanked the FBI for traveling around the world to collect evidence and interview witnesses in the case and said he hoped the verdict brings some peace to Bianca Rudolph’s family.