WASHINGTON (AP) — A federal judge on Tuesday dismissed the criminal case against former Trump administration national security adviser Michael Flynn but pointedly noted that a pardon Flynn received from the president last month does not mean that he is innocent. 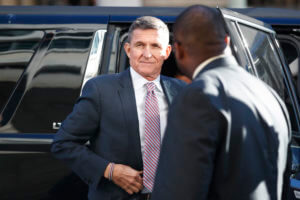 The order from U.S. District Judge Emmet Sullivan was expected in light of the pardon from President Donald Trump that wiped away Flynn’s conviction for lying to the FBI during the Russia investigation. Sullivan acknowledged in his 43-page order that the president’s broad pardon powers required dismissal and that the decision to pardon him is a political, rather than legal, one.

But he also stressed that a pardon, by itself, did not mean that Flynn was innocent of a crime he had twice pleaded guilty to committing. He dismissed as “dubious to say the least” the Justice Department’s stated rationales for seeking to drop the case — a request that was still pending at the time the pardon was issued — and noted the president’s own personal interest in this case.

“The history of the Constitution, its structure, and the Supreme Court’s interpretation of the pardon power make clear that President Trump’s decision to pardon Mr. Flynn is a political decision, not a legal one,” he wrote. “Because the law recognizes the President’s political power to pardon, the appropriate course is to dismiss this case as moot.”

However, he added, “a pardon does not necessarily render ‘innocent’ a defendant of any alleged violation of the law. Indeed, the Supreme Court has recognized that the acceptance of a pardon implies a ‘confession’ of guilt.”

Justice Department spokeswoman Kerri Kupec said, “Dismissal is, of course, the correct result.” Trump himself congratulated Flynn on the judge’s decision, writing in a tweet, “He and his incredible family have suffered greatly!”

The order brings to an end the yearslong saga involving Flynn, who was ousted from his White House job just weeks into his tenure.

He twice admitted guilt during special counsel Robert Mueller’s Russia investigation to lying to the FBI about conversations he had during the presidential transition period with the-then Russian ambassador to the United States. Those talks involved sanctions that the Obama administration had just imposed on Russia for election interference.

But the Justice Department last spring abruptly moved to dismiss the case, despite Flynn’s own guilty plea, arguing that there was insufficient basis for the FBI to have questioned him in the first place and that the statements he made during the interview were immaterial to the underlying investigation into whether the Trump campaign had coordinated with Russia.

Sullivan had resisted the department’s request to dismiss the case and appointed a former federal judge from New York to argue against its motion. He defended his stance on Tuesday even as he dismissed the prosecution, writing that “many of the government’s reasons for why it has decided to reverse course and seek dismissal in this case appear pretextual, particularly in view of the surrounding circumstances.”