MINNEAPOLIS (AP) — Jury selection in the trial of a former Minneapolis police officer charged in George Floyd’s death began Tuesday with the first potential juror excused after she revealed during questioning that she thought the way the officer acted was “not fair.”

The woman, a mother of three from Mexico, said she saw bystander video showing Derek Chauvin kneeling on Floyd’s neck, but she didn’t understand why the officer didn’t get up when Floyd said he couldn’t breathe.

“That’s not fair because we are humans, you know?” she said. 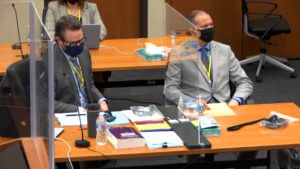 In this image from video, defendant and former Minneapolis police officer Derek Chauvin, right, listens as Hennepin County Judge Peter Cahill presides over pretrial motions before jury selection Tuesday, March 9, 2021 at the Hennepin County Courthouse in Minneapolis. Chauvin is charged in the May 25, 2020 death of George Floyd. (Court TV)

Defense attorney Eric Nelson noted that the woman said on her questionnaire that she wanted to be on the jury “to give my opinion of the unjust death of George Floyd.”

Potential jurors must show they can set aside their opinions on the case and view the evidence fairly. The woman said she would be willing to change her mind if she saw evidence from a different perspective, but Nelson used one of his 15 peremptory challenges to dismiss her without providing a reason.

Judge Peter Cahill earlier rejected Nelson’s request to remove her for cause over concerns about her English proficiency.

The questioning illustrates the challenges facing attorneys in seating a jury after video of Floyd’s arrest has been widely seen around the world. Cahill set aside three weeks for a process that could go even longer; opening statements are scheduled no sooner than March 29.

Chauvin is charged with second-degree murder and manslaughter in Floyd’s death, and jury selection is proceeding despite uncertainty over whether a third-degree murder charge will be added. The state has asked the Minnesota Court of Appeals to stop proceedings until that’s resolved, which could mean delay of weeks or months.

Floyd was declared dead on May 25 after Chauvin, who is white, pressed his knee against the Black man’s neck for about nine minutes, holding his position even after Floyd went limp. Floyd’s death sparked sometimes violent protests in Minneapolis and beyond, leading to a nationwide reckoning on race.

Cahill ruled on several pretrial motions Tuesday, setting parameters for trial testimony. Among them, Cahill said jurors will hear when Chauvin stopped working for the police department, but they will not be told that he was fired or that the city made a “substantial offer” to settle a lawsuit from Floyd’s family. Those details will not be allowed because they could imply guilt, Cahill said.

The city had no immediate comment when asked about the settlement offer. A message left with an attorney for the Floyd family was not immediately returned.

Cahill also ruled that a firefighter who can be heard in the bystander video, urging the officers to check Floyd’s pulse, will be allowed to testify about what she saw and whether she thought medical intervention was needed. But she won’t be allowed to speculate that she could have saved Floyd if she had intervened. Testimony about what training Chauvin received will be allowed.

Hundreds of people gathered outside the courthouse as proceedings began Monday, many carrying signs that read, “Justice for George Floyd” and “Convict Killer Cops.” On Tuesday, there was little evident protest activity.

Manslaughter requires proof that Chauvin caused Floyd’s death through negligence that created an unreasonable risk, and consciously took the chance of causing severe injury or death.