BOISE, Idaho (AP) — An Idaho state lawmaker accused of violating ethics rules by publicizing the name of an alleged rape victim in disparaging social media posts refused to answer questions she deemed “irrelevant” during an ethics hearing on Monday. The lawmaker also claimed the young Statehouse intern who reported the alleged rape wasn’t actually a victim or entitled to privacy under the law.

Republican Rep. Priscilla Giddings became the subject of two ethics complaints by about two dozen lawmakers after she publicized the rape accuser’s name, photo and personal details about her life in April by sharing links to an far-right news article on social media and in a newsletter to constituents. 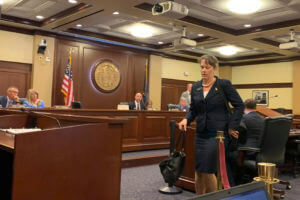 Rep. Priscilla Giddings makes her way into a committee hearing to determine if she violated the Idaho Legislature’s ethics rules in Boise, Idaho., on Monday, Aug. 2, 2021. An Idaho lawmaker accused of violating ethics rules by publicizing the name of an alleged rape victim in disparaging social media posts and then allegedly misleading lawmakers about her actions, said in an ethics hearing Monday that she did nothing wrong and claimed the allegations against her were politically motivated. (AP Photo/Rebecca Boone)

The Legislature’s ethics committee scheduled the public hearing after finding probable cause that Giddings engaged in “conduct unbecoming a representative, which is detrimental to the integrity of the House as a legislative body.”

The lawmaker accused of raping the intern, Republican Aaron von Ehlinger, resigned earlier this year after the ethics committee recommended he be removed from the Statehouse. Von Ehlinger has denied all wrongdoing. The rape allegation is under investigation by police.

Giddings told the ethics committee Monday that shortly after the allegations against von Ehlinger became public in April, she called one of his attorneys to ask if he would release von Ehlinger’s response to the rape accusation, and if he planned on including the accuser’s name.

After the attorney did so, Giddings said she checked with a news reporter to determine if he had received the document, Giddings told the committee.

Then she said she went on Facebook to post a link to a different far-right blog article that included the intern’s photo, name and other personal information — and linked to the same article in a newsletter to constituents.

After the intern’s identity was revealed, she was subjected to a flood of harassment. Advocates for victims of sexual assault said the situation showed why many are afraid to report crimes.

But Giddings, who is running for lieutenant governor, said the complaints about her behavior amounted to little more than “woke cancel culture” and claimed the ethics investigation was politically motivated.
She also said sharing the article link was the same as handing someone a newspaper, and was protected under her First Amendment right to free speech.

When Giddings entered the hearing Monday, she was met with applause, shouts of support and a standing ovation by some supporters in the audience — which included some militia members, members of an anti-vaccination group and others with far-right political organizations.

Some wore shirts with messages of support, including “victims for Priscilla,” and “Stand with Priscilla, fighting for our freedom.”

In her opening statement, Giddings said the ethics investigation was an unfair attack by political opponents and that she exercised her constitutionally protected right to free speech by sharing the link that revealed the intern’s identity.

Giddings also said she believed the outcome of the hearing had been pre-determined and left the hearing room for most of the day, declining to cross-examine any of the witnesses who testified against her.

Rep. Brooke Green, a Democrat and one of the bipartisan group of lawmakers that signed onto an ethics compliant, said that the other two dozen lawmakers who also signed the complaint were approached individually and not told who else was signing to ensure that political motivations didn’t play a part.

Green said the complaint was made because the Legislature has an obligation to ensure that sexual assault victims are safe and not revictimized by having their privacy violated.

Rep. Greg Chaney, a Republican who brought one of the complaints against Giddings, said not all speech is protected under the First Amendment, including speech that wrongly defames someone.

Chaney also said Giddings’ actions amounted to retaliation against an employee or coworker who reports harassment or sex assault and therefore did not qualify as constitutionally protected speech.

Republican Rep. Julie Yamamoto, who also signed one of the complaints, testified that she would have withdrawn her name and forgiven Giddings if Giddings had apologized.

But that never happened, and Yamamoto said she didn’t want to be counted among the lawmakers who are unwilling to hold each other accountable.

The hearing grew increasingly tense after the committee called Giddings to return as a witness, asking her why she shared the links and whether she felt that the intern — whom the committee called “Jane Doe” — was entitled to any privacy protections under the state’s crime victim laws.

“You’re way out of the park right now because there is no victim, so that doesn’t apply at all,” Giddings said.

Christopher McCurdy, the attorney representing the ethics committee, then asked Giddings, “Do you believe Jane Doe is entitled to dignity during the ethics hearing?”

She also said she wasn’t initially aware that the intern’s photo was included in the post she made on her page, and that she only skimmed the article before sharing it.

The link and the photo remained on her page until the afternoon of April 29 and screenshots collected by The Associated Press showed that commenters on that Facebook post and others repeatedly criticized Giddings for “doxing” the alleged victim. Critical comments appeared to be frequently deleted.

Some of the committee members grew visibly frustrated with Giddings’ combative approach at the hearing, particularly when she refused to answer questions she deemed irrelevant or that she said focused on her beliefs.

“Just be candid with the committee. Tell us ‘yes’ or ‘no,'” Republican Rep. Brent Crane said. “Don’t hedge this way and hedge that way and play semantics and games.”

Giddings declined to call any witnesses to testify on her behalf, saying she thought that the committee would have served the subpoenas for her. She said she wasn’t able to reach them all by email.

The hearing is scheduled to resume Tuesday, when committee members will decide whether they will recommend that the full House censure, reprimand or expel Giddings.