BOISE, Idaho (AP) — An Idaho lawmaker who publicized the name of a 19-year-old intern who accused another state lawmaker of rape will face a legislative ethics hearing next month.

The House Ethics and Policy Committee found probable cause that Rep. Priscilla Giddings, a Republican from the tiny town of White Bird, engaged in “conduct unbecoming a representative, which is detrimental to the integrity of the House as a legislative body,” the committee announced Tuesday. 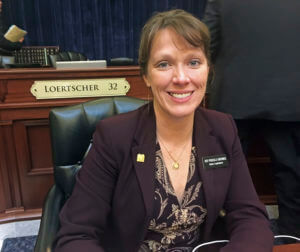 FILE – In this Thursday, March 1, 2018, file photo, Idaho Republican state Rep. Priscilla Giddings sits at the Capitol in Boise. The Idaho lawmaker who publicized the name of an intern who accused another state lawmaker of rape will face a legislative ethics hearing next month. The House Ethics Committee announced Tuesday, July 20, 2021, that it found probable cause that Giddings engaged in “conduct unbecoming a representative.” (AP Photo/Kimberlee Kruesi, File)

Giddings did not immediately respond to a phone message and an email from The Associated Press requesting comment.

She faced criticism and complaints this year after sharing links to a far-right blog post that included the intern’s name, photo and details about her life with thousands of people in a newsletter and on social media.

The intern had reported to police and legislative leaders that then-Rep. Aaron von Ehlinger, a Republican from Lewiston, had raped her after they went out to dinner.

Von Ehlinger has denied any wrongdoing and said the sexual contact was consensual. An ethics committee found he engaged in “conduct unbecoming” a lawmaker, and von Ehlinger resigned before the full House could vote on whether he should be removed from office.

The Ada County prosecutor’s office told the AP last week that police were still investigating the allegation against von Ehlinger.

The AP generally doesn’t name people who report sexual assaults unless they agree to be publicly identified. The young woman who reported the rape allegation has previously asked to be referred to as “Jane Doe.”

She was repeatedly harassed after she reported the allegation. Rep. Heather Scott, a Republican from Blanchard, sought a copy of the police report and made inquiries into how people who make rape allegations could themselves be charged with a crime. Giddings made disparaging remarks about the woman in a newsletter to constituents that included the links to the blog post with identifying details. Giddings also shared the same post on her social media page that has thousands of followers.

Members of a far-right anti-government group also tried to follow and harass the woman after she was called to testify in von Ehlinger’s ethics hearing. She later told the AP that the harassment was overwhelming during an already difficult time.

Under legislative rules, ethics committee investigations can only be triggered if a lawmaker files a formal complaint against a colleague. Those complaints aren’t made public unless the committee finds there is probable cause to hold a hearing on the matter, so its unclear if any complaints have been made about other lawmakers.

After the harassment was revealed, hundreds of people reached out to legislative leaders to complain about Giddings’ actions. Residents also called for the U.S. Air Force Academy to investigate whether Giddings, who is a major in the Air Force Reserves, violated any military rules.

The Air Force acknowledged in June that “an assessment is ongoing,” but because it’s subject to federal privacy rules, it’s not clear if that review resulted in any findings.

The House Ethics Committee received two formal complaints about Giddings but didn’t immediately release details on either, other than to say it found probable cause that “misconduct may have occurred regarding a portion of each complaint.”

The public ethics hearing is set for Aug. 2 at the Idaho Statehouse.

The intern’s attorney, Annie Pelletier Hightower with the Idaho Coalition Against Sexual & Domestic Violence, said that when Giddings publicized the woman’s personal information, the lawmaker did “pretty much exactly what every person who experiences sexual violence fears will happen to their information.”

Hightower said she was happy to learn an ethics hearing would be held.

“It’s an important step for the state, if we are really invested in creating space where people can report sexual violence,” Hightower said. “I think we should expect better of our lawmakers, and I am happy that there is some process for accountability that is ongoing.”