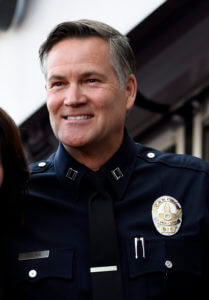 “Our office is dismayed” by the allegations against Cory Palka and will look at cases in which he was a witness to determine whether they must be reviewed and defense counsel notified, the DA’s office said in a statement.

Past prosecutions could be compromised by questions about Palka’s credibility, although the office said it was still trying to figure out the number of cases in which he played a role.

The prosecutor’s office also said it would consider criminal charges against Palka if investigators present them with evidence of police misconduct.

Palka, who formerly was in charge of the Los Angeles Police Department’s Hollywood Division, was something of a minor celebrity himself. He posed with performers receiving stars on the Walk of Fame, ran security for the Oscars awards show, was photographed on red carpets and even landed a bit part playing himself on the television drama “Bosch.”

Video footage of Palka went viral during the racial injustice protests in Los Angeles in the aftermath of George Floyd’s death when he took a knee with protesters on Sunset Boulevard in Hollywood.

However, from 2008 to 2014, Palka not only was a cop but he provided private security for Moonves at the Grammy Awards, which CBS produced.

Palka, who retired as a commander last year after nearly 35 years with the LAPD, did not return requests for comment, nor did an attorney for Moonves and CBS. 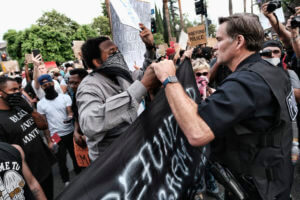 The report, which didn’t name Palka, was part of a settlement announced Wednesday by New York Attorney General Letitia James in which CBS and Moonves, its former president, agreed to pay $30.5 million for keeping shareholders in the dark while executives tried to prevent the allegations from becoming public.

Weeks after the #MeToo movement erupted with sex abuse allegations against film mogul Harvey Weinstein in 2017, Phyllis Golden-Gottlieb reported to police in the Hollywood Division that she had been sexually assaulted by Moonves in 1986 and 1988 when they worked together at Lorimar Productions, the studio behind “Dallas” and “Knots Landing.”

A law enforcement official briefed on the matter confirmed that Golden-Gottlieb, who died this summer, was the woman involved in the leak by Palka. The official was not authorized to speak publicly and did so on condition of anonymity.

Golden-Gottlieb went public with her accusations at the time Ronan Farrow reported on allegations against Moonves in The New Yorker in September 2018. Within hours of that publication, Moonves quit.

Nearly a year later, the woman filed a police report, which was marked “confidential” in three places. Within hours, Palka tipped off CBS and later met personally with Moonves and another CBS executive, the New York AG’s report said.

The report said the complainant had requested confidentiality. It cited the California Constitution, which prohibits disclosure of confidential information to “a defendant, a defendant’s attorney, or any other person acting on behalf of the defendant that could be used to locate or harass the victim or the victim’s family.”

The captain told CBS that he instructed police officers investigating the complaint to “admonish” the woman not to go to the media with her allegations. He also put CBS officials in touch with the lead investigator.

When the allegations ultimately became public, the captain sent a note to a CBS contact saying, “We worked so hard to try to avoid this day.” He sent Moonves a note saying he was sorry and, “I will always stand with, by and pledge my allegiance to you.” 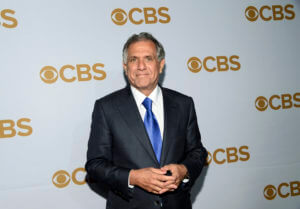 Moonves acknowledged having relations with three of his accusers, but said they were consensual. He denied attacking anyone, saying in a statement at the time that “Untrue allegations from decades ago are now being made against me.”

The Los Angeles County district attorney declined to file criminal charges against Moonves in 2018, saying the statute of limitations from Golden-Gottlieb’s allegations had expired.