TOPEKA, Kan. (AP) — A Kansas lawmaker who was forced out of one of the state Senate’s most powerful jobs following an arrest for drunken driving and speeding the wrong way on two interstate highways is planning to leave the Legislature in early January. 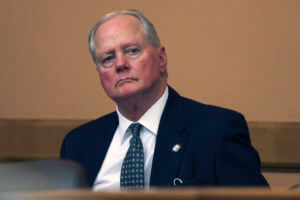 FILE – Kansas state Senate Majority Leader Gene Suellentrop, R-Wichita, listens during a meeting of fellow GOP senators at the Statehouse in Topeka, Kan., on March 17, 2021. Suellentrop, a Kansas lawmaker who was forced out of one of the state Senate’s most powerful jobs following an arrest for drunken driving and speeding the wrong way on two interstate highways, is planning to leave the Legislature in early January 2023. Suellentrop confirmed Tuesday, Nov. 29, 2022, that he plans to retire Jan. 2, 2023. (AP Photo/Andy Tsubasa Field, File)

Former Senate Majority Leader Sen. Gene Suellentrop, a Wichita Republican, confirmed Tuesday that he plans to retire Jan. 2, saying in an email that his 13 years as a lawmaker “is long enough.” State senators aren’t up for reelection until 2024, and Republicans in his district will find a replacement to serve the rest of his four-year term.

Republican senators who picked Suellentrop in December 2020 to set the chamber’s daily debate calendar and run their caucus meetings stripped him of the majority leader’s title four months later, though he kept his Senate seat. His ouster as majority leader came less than a month after his March 2021 arrest and criminal charges that included attempting to elude law enforcement, a felony. He pleaded no contest in October 2021 to misdemeanor charges of reckless driving and driving under the influence and served two days in jail.

“There are too many things in my life that are more important, at this stage, than serving in the Kansas Legislature,” Suellentrop said in his email Tuesday.

The 70-year-old Wichita businessman added that he was “most thankful for” constituents who supported him throughout his career. His plan to resign was first reported by the Sunflower State Journal.

Suellentrop’s criminal case received national attention because he was a legislative leader and reportedly had been driving up to 90 miles per hour (145 kilometers per hour). A Kansas Highway Patrol trooper also said in an affidavit that Suellentrop at one point called him “donut boy.” No one was injured.

Law enforcement radio recordings and 911 calls released by the local sheriff’s department showed multiple people reported Suellentrop’s SUV traveling the wrong way on Interstate 470 near a south Topeka exit and then on Interstate 70 through northern Topeka. The Highway Patrol said Suellentrop’s blood-alcohol level was 0.17, more than twice the legal limit of 0.08.

Besides serving two days in jail, a judge placed Suellentrop on probation for a year, though court records show he was released early, in July.

Suellentrop’s legislative career began in December 2009, when local Republicans picked him to fill a vacancy in the state House. He won his Senate seat in 2016 and was reelected in 2020.

Chase Blasi, a former aide to Masterson and Masterson’s predecessor as Senate president, is seeking Suellentrop’s seat. Masterson endorsed him.