RICHMOND, Va. (AP) — A former student at a private college in Virginia was arraigned Wednesday on murder charges, a day after authorities say he returned to his alma mater and fatally shot two campus officers.

Police identified the gunman in Tuesday’s shooting at Bridgewater College as Alexander Wyatt Campbell, 27. A spokeswoman for the small liberal arts school about 125 miles (200 kilometers) northwest of Richmond said Campbell was a student there from 2013 to 2017. 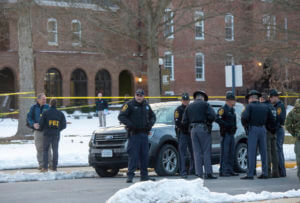 WWBT-TV reported that Campbell appeared via video conference for his arraignment and appeared to be restrained in a chair. Gene Hart, an attorney appointed by the judge, asked that Campbell undergo a mental health evaluation. Hart declined to comment after the hearing.

“My son is mentally ill and he did something that I could not control and no one could come to help him,” Campbell said in an interview with the newspaper on Wednesday. “I’m sorry for what has happened. I could not prevent it.”

“This is a very hard time for Wyatt and his family and for the families that he has affected,” she said through tears. “It is not about gun control. It is not. … It is about mental illness and how we have no control over that, the way society is right now. I can’t help my son.” 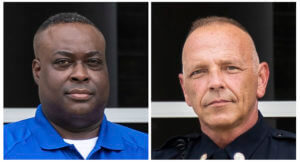 School president David W. Bushman identified the slain officers as campus police officer John Painter, 55, and campus safety officer J.J. Jefferson, 48. He said the campus was mourning the loss of the well-known and well-loved officers. In a statement, Bushman said the two were known as “the dynamic duo” and that Painter was the best man at Jefferson’s wedding this year.

Virginia State Police said the shooting happened shortly after the campus officers responded to reports of a suspicious man on campus around 1:20 p.m. Tuesday. Spokeswoman Corinne Geller said that after a brief interaction, the man opened fire on the officers, shot them and fled on foot. The two officers died on the scene.

Officers from state and local law enforcement agencies then joined the search and found the suspect off campus. He had waded into a river and was taken into custody on an island in the river, state police said. Police said multiple guns were recovered as evidence both on and off campus.

Campbell was treated for a gunshot wound that was not life threatening. Geller said that it wasn’t clear if he received the wound in an exchange with police or if it was self-inflicted.

Authorities have so far not offered any motive for the shootings.

“Two members of the Bridgewater College family were senselessly and violently taken from us. The sadness is palpable. Words are not adequate, not nearly so, to express the grief, sadness, fear and — justifiably — the anger we all feel,” Bushman said in a statement. 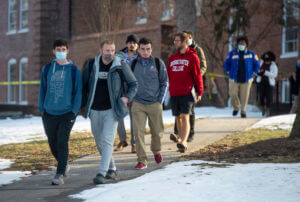 Students exit Flory Hall on the campus of Bridgewater College following a shooting that claimed the lives of a campus police officer and a campus security officer in Bridgewater, Va., Tuesday, Feb. 1, 2022. (Daniel Lin/Daily News-Record via AP)

Logan Bogert, a spokesperson for Bridgewater College, said that while Campbell was a student at the school, he was on the track and cross country teams. His last known address was in Ashland. Campbell attended Patrick Henry High School in Ashland.

Virginia Gov. Glenn Youngkin ordered flags to be flown at half-staff across the state Wednesday to honor the officers.

Bridgewater College has been historically affiliated with the Church of the Brethren. It had an enrollment of about 1,500 full-time students in the fall of 2021, according to its website.

Campbell’s next court appearance is scheduled for Feb. 16.