But after presenting dozens of charts showing the results of IQ tests and other examinations and long explanations of averages and standard deviations that even had the judge joking she understood why some jurors were drinking strong Cuban coffee, assistant prosecutor Jeff Marcus pulled his trump card. 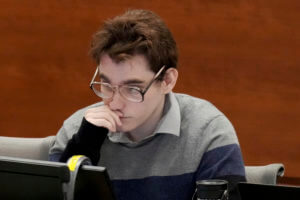 Marjory Stoneman Douglas High School shooter Nikolas Cruz is shown at the defense table during the penalty phase of Cruz’s trial at the Broward County Courthouse in Fort Lauderdale on Tuesday, Oct. 4, 2022. Cruz previously plead guilty to all 17 counts of premeditated murder and 17 counts of attempted murder in the 2018 shootings. (Amy Beth Bennett/South Florida Sun Sentinel via AP, Pool)

He turned to the simplest test given to Cruz: How fast can the confessed killer tap his dominant left index finger?

During tests administered earlier this year by experts his attorneys hired, Cruz averaged 22 taps in 10 seconds. Prosecution neuropsychologist Robert Denney said the average male scores 51 on that test and a 22 would be a score only someone with a severe brain injury that causes physical stiffness would tally.

Marcus then played a cellphone video snippet from the Feb. 14, 2018, massacre at Parkland’s Marjory Stoneman Douglas High School that recorded Cruz firing his AR-15-style semiautomatic rifle 20 times in seven seconds that included a one-second pause — each shot required a separate trigger pull. He then showed security video of Cruz smoothly turning and firing two shots into a coach who tried to stop him and another of him quickly removing his gun’s magazine and reloading a new one.

A person who genuinely scored so poorly on the finger tapping test “would not be able to pull the trigger like that,” Denney said, nor would he be able to fire and reload in one motion like he did.

Cruz, 24, pleaded guilty a year ago to the murders of 14 students and three staff members — the trial will only decide whether he is sentenced to death or life without the possibility of parole. A unanimous vote by the seven-man, five-woman jury is required for Cruz to get death. Anything less and his sentence will be life. 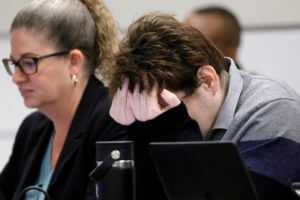 Lead prosecutor Mike Satz hopes Denney’s testimony will rebut the defense’s contention that heavy drinking by Cruz’s birth mother during pregnancy put him on a lifelong path of bizarre and sometimes violent behavior that culminated in the shootings. The defense also tried to show that his adoptive mother, Lynda Cruz, became overwhelmed after her husband died when Cruz was 5 and never got him complete treatment for his mental health issues. She died less than three months before the shootings.

Denney, who does contract work for the federal prison system, testified Tuesday that he disagrees with the defense experts’ contention that Cruz suffers from fetal alcohol spectrum disorder. The Missouri practitioner said the former Stoneman Douglas student’s IQ scores of about 90 and the results of tests given him after the attack don’t support that diagnosis.

“Mr. Cruz’s scores are exactly what we would expect for person who does not have any fetal alcohol problems,” Denney said.

Denney will be cross-examined by Cruz’s attorneys on Thursday. Court will not be in session Wednesday because of Yom Kippur. The prosecution is expected to finish its rebuttal case in the coming days with closing arguments and deliberations scheduled for next week.