FERNLEY, Nev. (AP) — Authorities in northern Nevada are holding a news conference Tuesday to renew efforts to find an 18-year-old woman last seen outside a Walmart, where a man with a mask and hoodie got into her car.

Lyon County Sheriff’s Office deputies continue to search for Naomi Irion of Fernley, who has been missing for over a week.

Irion’s older brother told reporters Thursday that store surveillance video showed a man approach the driver’s side of his sister’s car before dawn on March 12. The video appeared to show that he said or did something to make her move over before he got in and drove away.

Lyon County Sheriff Frank Hunewill said her car was found a short distance away and that evidence suggested a suspect may be driving a dark four-door Chevrolet 2500 High Country pickup truck. 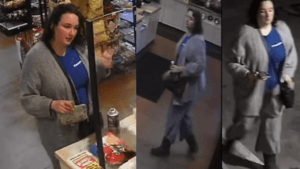 This photo taken from store surveillance video and provided by the Lyon County Sheriff’s Office, shows Naomi Irion, 18, of Fernley, Nev., making a purchase shortly before authorities say she disappeared before dawn on Saturday, March 12, 2022. Family members and Sheriff Frank Hunewill said Thursday, March 17, 2022, that Irion has not been seen since a man wearing a mask and a hooded sweatshirt got into her car outside a Walmart store near Interstate 80 in rural Fernley. (Lyon County Sheriff’s Office)

Fernley is a town of about 20,000 residents a 30-minute drive east of Reno — at crossroads including Interstate 80 and U.S. 50, which in Nevada is nicknamed “The Loneliest Road in America” in the 1980s.

Her brother, Casey Valley, said Irion typically rides the bus from the Walmart parking lot to work at a Reno-area Panasonic facility. She was reported missing when she never returned home Sunday.

Authorities in neighboring counties and the FBI are involved in the investigation.

Meanwhile, friends and family are planning a candlelight vigil in Out of Town Park in Fernley Tuesday night.