TAMPA (Court TV) — A Florida man was sentenced to life in prison without the possibility of parole after a jury convicted him of kidnapping his estranged wife and plotting their death in a murder-suicide.

Trevor Summers, 45, was found guilty of 11 charges, including attempted murder and sexual battery in a March 2017 incident that prosecutors described as a “scorned lover” who was unable to come to terms with the reality of his soon-to-be ex-wife dating other people.

According to police, Summers and Alisa Mathewson (formerly Summers) were in the midst of a tumultuous divorce when the defendant concocted his dark plan.

On March 11, 2017, Trevor allegedly texted his oldest daughter and asked her to leave a window open to her mother’s home. He then used the ajar window to enter the home and confront Alisa as she slept in her bedroom with their youngest children.

Over the next several hours, Trevor instructed their oldest daughter to remove all the children and take them to his home. Now alone in the house with Alisa, he allegedly tied her to a bed while trying to convince her to run away with him to an island using millions he had in an offshore account. To survive, Alisa decided to comply and keep Trevor talking. At some point, he removed her restraints, and the two talked, had sexual intercourse, showered, and ate. At another point, Trevor allegedly held a pillow over her face for several minutes, causing her to lose consciousness briefly.

By nightfall, Trevor believed Alisa agreed to run away with him, and they left the home. They stopped at a Walgreens, where police received reports of a screaming woman with her hands tied behind her back being forced into a dark-colored SUV. Authorities were unable to locate the pair for the next two days. 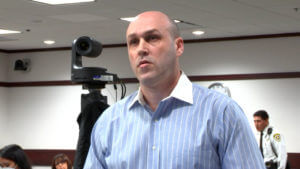 Defendant Trevor Summers, who is representing himself at trial, addresses the court Monday, Aug. 22, 2022, in Tampa, Florida. (Court TV)

On March 13, police were tipped off to their location near a marina. Trevor was arrested and Alisa was taken into protective custody. Inside their vehicle, police reportedly found notes written by Trevor that revealed his possible plot. Another note was written to their children, apologizing for ending their mother and father’s lives, and another note contained a confession.

Trevor Summers, who fired several different attorneys and petitioned to have one judge thrown off his case, had elected to represent himself. However, on the morning of jury selection, he opted for his right to counsel and was court appointed criminal defense attorney Anthony Marchese.

In a dramatic turn of events, while the defendant’s ex-wife was testifying, Summers’ once again petitioned to represent himself and took over the cross-examination of the victim.