To hear actor Ellen Barkin tell it, Johnny Depp was a controlling, jealous and angry man even back in the 1990s, when the two dated.

Barkin added: “I had a scratch on my back once that got him very, very angry because he insisted it came from me having sex with a person who wasn’t him.”

Barkin recalled her relationship with Depp during a previously taped deposition that was played in a Virginia courtroom Thursday by lawyers for Depp’s ex-wife, Amber Heard.

Heard’s attorneys are trying to undermine Depp’s libel lawsuit against her. Depp says a 2018 op-ed piece Heard wrote in The Washington Post unfairly portrayed him as a domestic abuser and cost him a lucrative Hollywood career that included the “Pirates of the Caribbean” movie franchise.

Depp has testified he never struck Heard and that he was the victim of abuse inflicted by her. But Heard’s attorneys say those denials lack credibility because he frequently drank and used drugs to the point of blacking out. 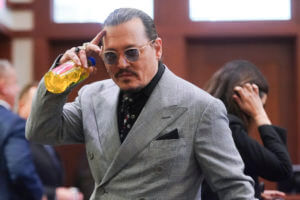 Actor Johnny Depp appears in the courtroom during a break at the Fairfax County Circuit Courthouse in Fairfax, Va., Thursday, May 19, 2022. Actor Johnny Depp sued his ex-wife Amber Heard for libel in Fairfax County Circuit Court after she wrote an op-ed piece in The Washington Post in 2018 referring to herself as a “public figure representing domestic abuse.” (Shawn Thew/Pool Photo via AP)

During Barkin’s deposition, she testified that Depp was “always drinking or smoking a joint” or doing other illegal drugs. She said she dated Depp for about three to five months and characterized the relationship as more sexual than romantic.

Barkin co-starred with Depp in “Fear and Loathing in Las Vegas.” During filming, Barkin said Depp threw a wine bottle in her direction while he was fighting with some friends in a hotel room. However, she said she didn’t know why he threw the bottle.

Heard’s attorneys argue that Depp’s career free-fall was the result of his own bad behavior — not Heard’s op-ed. They played witness testimony that charted the actor’s rise and fall from “the biggest movie star in the world” to a man who struggled with drugs, money and the ability to show up at movie sets on time.

Tracey Jacobs, who served as the actor’s agent for about 30 years, said Depp was “showing up late to set consistently on virtually every movie” during their final years working together.

“I was very honest with him and said, ‘You’ve got to stop doing this – this is hurting you,'” Jacobs said. “And it did.” 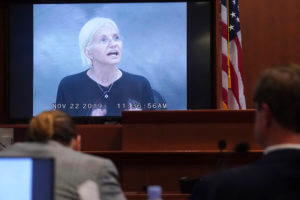 Actor Ellen Barkin testifies in a previously recorded video deposition at the Fairfax County Circuit Courthouse in Fairfax, Va., Thursday, May 19, 2022. Actor Johnny Depp sued his ex-wife Amber Heard for libel in Fairfax County Circuit Court after she wrote an op-ed piece in The Washington Post in 2018 referring to herself as a “public figure representing domestic abuse.” (Shawn Thew/Pool Photo via AP)

Jacobs said Depp was an extraordinary talent but his behavior in the years before he fired her in 2016 became increasingly unprofessional, while his drug and alcohol use increased, Jacobs said.

“And it also got around town,” Jacobs said. “I mean, people talk, it’s a small community. And it made people reluctant to use him.”

Joel Mandel, Depp’s former business manager, testified in a previously recorded deposition that the “Pirates of the Caribbean” films had “catapulted him into an entirely different level of success.”

“It meant more employees,” Mandel said. “It meant buying additional property. … It meant a bigger life and a more expensive one.”

Things began to change around 2010, and it “became clear over time that there were issues with alcohol and drugs,” Mandel said. “And that translated into more erratic behavior, more stressful behavior, more times when it was difficult to engage in the kinds of conversations I needed to do my job.”

At one point, Depp was spending around $100,000 a month for a doctor and staff to help him get sober, Mandel said. At another, he was spending $300,000 a month on full-time staff, he said. And he said there also were times when Depp spent thousands of dollars a month on prescription drugs. 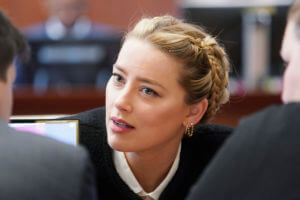 Actor Amber Heard appears in the courtroom at the Fairfax County Circuit Courthouse in Fairfax, Va., Thursday, May 19, 2022. Actor Johnny Depp sued his ex-wife Amber Heard for libel in Fairfax County Circuit Court after she wrote an op-ed piece in The Washington Post in 2018 referring to herself as a “public figure representing domestic abuse.” (Shawn Thew/Pool Photo via AP)

“The spending levels had grown very, very, very large and required that level of incredibly high income to be maintained,” Mandel said. “And when it dropped off, the disconnect became untenable.”

Mandel said he became extremely worried about Depp’s finances in 2015, but that Depp met those concerns with anger. He said the actor fired him in 2016.

Bruce Witkin, a musician who was friends with Depp for nearly 40 years, testified in a previously recorded deposition that Depp could become jealous in his romantic relationships.

That jealousy was demonstrated with Heard when she would be off filming a movie “or doing something that he couldn’t be around to see what was going in,” Witkin said. “I think he would work himself up.”

Witkin said he once saw bruises on Heard’s arm when he and Depp were working on a documentary about Rolling Stones guitarist Keith Richards. And he saw Depp with a “fat lip” one time. But Witkin said he never saw Depp or Heard physically abuse each other.

Witkin said he tried to help Depp with his substance abuse and had set him up with a therapist.

Depp’s sister, Christi Dembrowski, was always concerned with his well-being, both in terms of his substance abuse and generally, Witkin said.

“Everybody, I think, deep down inside was, but … the people on the payroll won’t really say much. They’ll try but they don’t want to lose their job,” Witkin said. “I’m not saying they all fall into the category. But it’s a strange thing around people like him. Everybody wants something.”

Witkin said his friendship with Depp began to dissolve toward the end of 2017, when the actor started to pull away.

“He wrote me this weird text saying I stabbed him in the back and badmouthed him,” Witkin said. “And I’m like, ‘What are you talking about?’ And he wouldn’t explain it. And I pretty much haven’t seen him since 2018.” 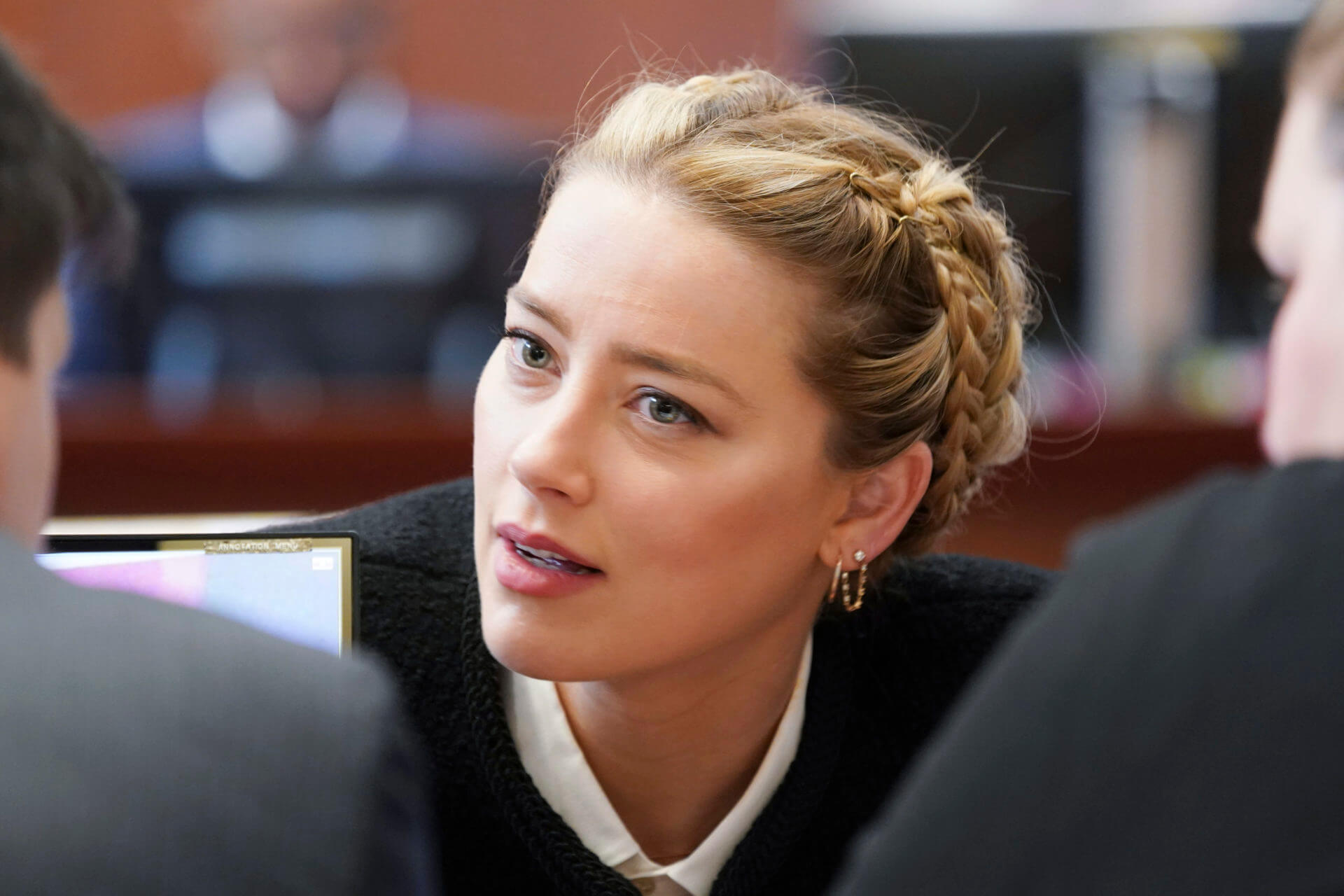 Actor Amber Heard appears in the courtroom at the Fairfax County Circuit Courthouse in Fairfax, Va., Thursday, May 19, 2022. Actor Johnny Depp sued his ex-wife Amber Heard for libel in Fairfax County Circuit Court after she wrote an op-ed piece in The Washington Post in 2018 referring to herself as a "public figure representing domestic abuse." (Shawn Thew/Pool Photo via AP)
MORE NEWS