AKRON, Ohio – An Ohio woman convicted last year of making a bogus Domino’s pizza delivery call to lure another woman to her death has been sentenced to life with the possibility of parole.

Last November, Erica Stefanko was found guilty of murder and aggravated murder for the part she played in the 2012 slaying of Ashley Biggs. Biggs, a pizza delivery driver at the time of her death, had been embroiled in a bitter custody battle with her ex and Stefanko’s then-husband, Chad Cobb.

Stefanko must serve at least 30 years before she is considered for parole.

Cobb, who testified against Stefanko, is already serving a life sentence for Biggs’ murder. He initially faced the death penalty, but wound up pleading guilty in 2013 to aggravated murder and other charges related to Biggs’ death. 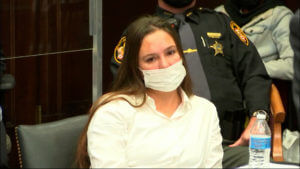 Erica Stefanko is seen in court during opening statements on November 16, 2020. (Court TV)

After Stefanko placed the call ordering pizza to a closed business address under a fake name, Cobb waited at that location for Biggs. Upon Biggs’ arrival, he tased, beat and strangled her.

Although Biggs was killed in 2012, Stefanko wasn’t arrested until new information about her involvement in the crimes came to light in 2019.

Earlier this year, one of Stefanko’s defense lawyers requested that she be granted a new trial. Attorney Kerry O’Brien argued that the judge made a procedural error during the November 2020 trial and that jurors hastily reached a verdict due to COVID-19 concerns and the imminent Thanksgiving holiday. That request was denied.

Stefanko had asked to appear remotely but that request was denied by the judge.