MADISON, Wis. (AP) — At one point, the 18-year-old murder defendant stood behind the seated, black-robed judge and peered over him to review evidence. At another, on Veterans Day, the judge led the jury and others in the courtroom in applause for veterans just as a defense witness who had served in the Army was about to testify.

And as the case neared its conclusion, the judge permitted the defendant to draw numbers from a raffle drum to determine which jurors would serve as alternates — creating the appearance, however small, that the defendant was helping to administer his own trial.

As Kyle Rittenhouse’s trial has played out in the Kenosha courtroom of Circuit Judge Bruce Schroeder, moments of apparent deference to the defendant have struck many observers as curiously different from how murder proceedings often unfold. Schroeder addressed some of these observations Wednesday, saying “people should have confidence in the outcome of the trial.”

He called some coverage of the case “frightening.”

Schroeder, the longest-serving circuit judge in Wisconsin, said he’s been letting defendants draw jury alternates’ numbers for an estimated 20 years. He explained Wednesday that he started doing it after the trial of a Black man when there was only one Black person on the jury and that person was dismissed after the court clerk drew the juror as an alternate. Schroeder said that while there was nothing wrong with the way the alternate was picked, the optics looked bad. Since then he said he’s had an almost universal policy of having defendants draw alternates.

Legal experts said that might be unconventional, but not necessarily wrong. Schroeder said he hasn’t had any complaints in this case, and suggested that those who were dissatisfied were trying to undermine the results of the trial.

But if the judge had led jurors in clapping as a prosecution witness took the stand, making that witness seem more laudable or credible, it would surely be grounds for defense attorneys to appeal a conviction, noted Robert Weisberg, faculty co-director of the Criminal Justice Center at the Stanford Law School. Prosecutors, however, can’t appeal a not guilty verdict.

If nothing else, the discussion about the judge’s conduct has underlined the importance of how the judicial system is perceived — especially in a high-profile case where the outcome can exacerbate societal tensions around issues like race, guns, protests, vigilantism, and law and order.

“Our hope is that the court system and our judges, while human, will uphold this role of a neutral arbiter so that everybody gets a fair trial — the defendant and the people — and that we can arrive at a decision that we can all agree on was legitimate,” said Mary D. Fan, a former federal prosecutor who teaches at the University of Washington Law School.

“When people have doubts about that impartiality,” Fan said, “it undermines our trust in the justice of the verdict.”

Rittenhouse, a former police youth cadet who faces life in prison if convicted on the most serious charge against him, used an AR-style semi-automatic rifle to kill two men and wound a third during a night of protests against racial injustice in the summer of 2020. Rittenhouse is white, as were those he shot. The killings followed the police shooting of Jacob Blake, a Black man, during a domestic disturbance in Kenosha.

Rittenhouse testified he acted in self-defense. Prosecutors argue he went to the protest looking for a reason to shoot.

It’s primarily the defendant, not prosecutors, whose rights are protected under the law, and judges must guard them carefully. Schroeder has done so appropriately in some instances, legal experts said, such as when he scolded prosecutor Thomas Binger for asking Rittenhouse why he had not discussed the shootings before taking the witness stand. Defendants have a right to remain silent. 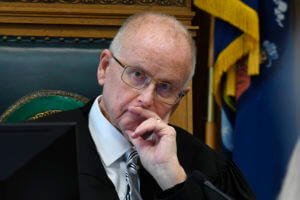 But judges should not be so solicitous of a defendant that it raises questions about the fairness of the trial. Balancing that can be tricky, especially where a jurist’s decisions are under such national scrutiny. Siding too closely with a defendant could lead to a wrongful acquittal or inflame societal tensions, while an obvious alignment with prosecutors could lead to a tainted — and ultimately overturned — conviction.

“The judge should be as close to invisible as possible,” Weisberg said.

Schroeder has been anything but. He laughs often, tosses trivia questions at jurors, has talked about his difficulty with technology and made an attention-getting comment suggesting that he hoped the Asian food coming for lunch wasn’t stuck at backlogged West Coast ports. He has often sparred with the prosecution.

The 75-year-old Schroeder, on the bench since 1983, isn’t known for leniency toward defendants. In 2018, he ordered a woman convicted of shoplifting to tell the manager of any store she entered that she was on supervision for theft.

Schroeder told the woman that “embarrassment does have a valuable place in deterring criminality.” A state appeals court overturned the sentence.

Some of his pretrial rulings in the Rittenhouse case have also drawn attention. He ruled that prosecutors couldn’t argue that Rittenhouse was affiliated with the Proud Boys or that he attacked a woman months before the shootings. Nor would he allow the people Rittenhouse shot to be referred to as “victims.”

Facts about a defendant’s background are often excluded from trial if they’re not relevant to the charges at hand, and “victims” could be considered a prejudicial term when a defendant is claiming self-defense.

On Wednesday, Schroeder said: “How would you like to be put on trial for a crime? … Is it so difficult to just use the term complaining witness, instead of prejudging … whether there’s a victim and whether there was a crime committed?”

Other rulings were more unusual.

Awaiting the trial, Rittenhouse had been out of custody on bail. When he moved and failed to update his address — an apparent violation — prosecutors sought to have him re-arrested, with his bail increased.

During a testy hearing earlier this year, the judge refused — and wouldn’t share the defendant’s new address with prosecutors, noting defense arguments that Rittenhouse was in hiding because of threats.

“I hope you’re not suggesting sharing this with our office would lead to further violence,” Binger said at the time. “I have never heard of a situation where the information has been withheld from my office.”

Questions about the optics of Rittenhouse’s case date to the moments after the shootings. Video quickly emerged of Rittenhouse walking by police with his hands up and his rifle strapped to his chest while witnesses identified him as the shooter. Police did not immediately arrest him, and he later turned himself in. 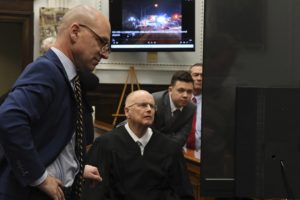 Defense attorney Corey Chirafisi, left, Judge Bruce Schroeder and Kyle Rittenhouse look at video screen as attorneys for both sides argue about a video during Kyle Rittenhouse’s trial at the Kenosha County Courthouse in Kenosha, Wis., on Friday, Nov. 12, 2021. Rittenhouse is accused of killing two people and wounding a third during a protest over police brutality in Kenosha, last year. (Mark Hertzberg /Pool Photo via AP)

An officer testified that he did not hear witnesses yelling that Rittenhouse was the shooter, but in the days afterward many people questioned whether a Black gunman would have received such hands-off treatment.

Aspects of the trial have been similarly noteworthy. At one point, Rittenhouse stood behind Schroeder as they reviewed evidence — a moment that occurred outside the presence of the jury, but which nevertheless was captured in news images and appeared striking for having a murder defendant so close to a judge.

Phil Turner, a former federal prosecutor who now works as an attorney in Chicago, said he didn’t believe Schroeder had unduly sided with Rittenhouse. He noted the behavior of judges varies widely in a system where they win their seats through electoral politics, not necessarily legal merit.

Lawyers, he suggested, simply must adjust to each courtroom.

“You learn the music the judge is playing,” he said, “and then you dance to it.”