MIAMI (AP) — A South Florida village commissioner and former beauty queen has been sentenced to a year of probation and 50 hours of community service for pretending to be a paralegal to get into a federal immigration detention center to see her romantic partner.

Julianna Clare Strout, 36, was sentenced Wednesday in Miami federal court after pleading guilty to misdemeanor charges of attempting to enter, and entering, a federal facility using fraud and false pretenses, according to court records. 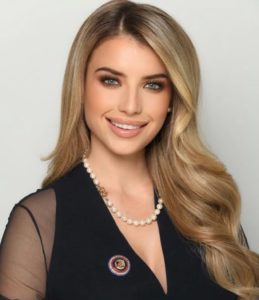 Strout was elected to the North Bay Village Commission in 2018. Her term ends next month, and she isn’t running for re-election. North Bay Village covers two small islands in the bay between the northern ends of Miami and Miami Beach.

In October 2021, the Krome Service Processing Center in Miami temporarily suspended social visits because of the COVID-19 pandemic. Legal visits were permitted.

Strout entered Krome three times that month by telling Immigration and Customs Enforcement officials that she worked as a paralegal for a law firm and that she needed a client, who was actually her romantic partner, to sign legal documents, prosecutors said.

Strout presented officials with a letter written on letterhead from a real law firm. But she had never worked for the firm, and attorneys there said they never authorized her to use their letterhead or visit Krome on their behalf.

On one occasion, after initially being denied entry, Strout presented officers at Krome with her North Bay Village Commissioner badge, explained that she was a public official and asked to enter Krome on that basis, investigators said.

Strout won the Miss Rhode Island competition in 2009 and competed in the Miss America pageant in 2010.