TAMPA, Fla. (AP) — A once-standout U.S. narcotics agent who used his badge to build a lavish lifestyle of expensive cars, parties on yachts and Tiffany jewels was sentenced to more than 12 years in federal prison Thursday for conspiring to launder money with a Colombian cartel.

But even as José Irizarry admitted to his crimes, he blamed former colleagues at the U.S. Drug Enforcement Administration for fostering a culture of corruption that desensitized him to the implications of violating the law. 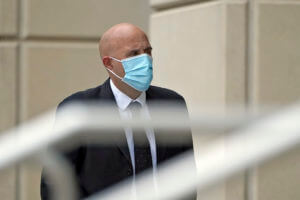 FILE – Former DEA agent Jose Irizarry arrives at the United States Courthouse Thursday, Nov. 18, 2021, in Tampa, Fla. Irizarry, a once-standout U.S. narcotics agent who used his badge to build a lavish lifestyle of expensive cars, parties on yachts and Tiffany jewels, was sentenced to more than 12 years in federal prison on Thursday, Dec. 9, 2021, for conspiring to launder money with a Colombian cartel. (AP Photo/Chris O’Meara, File)

U.S. District Court Judge Charlene Honeywell in handing down her sentence expressed disgust with the DEA for its failings and said other agents corrupted by “the allure of easy money” also needed to be investigated.

“This has to stop,” the judge said. “You were the one who got caught but it is apparent to this court that there are others.”

The DEA did not immediately respond to a request for comment. Prosecutors have described Irizarry’s crimes as a “shocking breach of the public’s trust.”

Irizarry’s allegations underscore the porous oversight he received during his career, in which he was entrusted with the government’s use of front companies, shell bank accounts and couriers to combat international drug trafficking.

They also raise new questions about whether his colleagues in the Miami field office, where Irizarry’s criminal activity began, similarly abused the badge in their handling of confidential informants who every year move tens of millions of dollars in dirty money under the DEA’s supervision.

Dominguez in court filings revealed that since Irizarry’s arrest last year he has met with prosecutors for “endless hours” to provide information on the criminal activities of “fellow law-enforcement agents who initiated him in a life of crime.”

Honeywell recently sealed “sensitive” documents filed in the criminal case, saying their disclosure could potentially impede an ongoing criminal investigation, cause targets to flee and hinder cooperation from other witnesses. So far, other than Irizarry’s wife, Nathalia Gomez-Irizarry, and a Colombian customs worker, nobody else has been charged in the conspiracy.

The U.S. Justice Department’s Inspector General slammed the DEA in a report over the summer for failing to properly oversee what are supposed to be tightly monitored stings of the sort Irizarry worked on. As a result of the rebuke, which came on the heels of a string of scandals involving agents overseas, Anne Milgram, the DEA’s new administrator, ordered an outside review of the agency’s foreign operations, which is ongoing.

The DEA has been shaken by repeated cases of misconduct in reach years, including agents charged with wire fraud, bribery and selling firearms to drug traffickers. Thursday’s hearing came just four months after another longtime DEA agent, Chad Scott, was sentenced to more than 13 years behind bars for stealing money from suspects, falsifying government records and committing perjury.

The DEA hired Irizarry, 47, and allowed him to handle sensitive financial transactions even after he failed a polygraph exam, declared bankruptcy and kept close ties to a suspected money launderer who would go on to become the godfather of the agent’s twin daughters with his Colombian wife.

He pleaded guilty last year to 19 federal counts, including bank fraud, admitting he parlayed his expertise in money laundering into a life of luxury that prosecutors said was bankrolled by $9 million he and his co-conspirators diverted from undercover money laundering investigations.

The spoils included a $30,000 Tiffany diamond ring for his wife, luxury sports cars and a $767,000 home in the Caribbean resort city of Cartagena — on top of residences in south Florida and Puerto Rico. Before he resigned in 2018, Irizarry’s ostentatious habits and tales of raucous yacht parties had become well known among DEA agents and prosecutors with whom they worked.

To further the scheme, prosecutors said, Irizarry filed false reports and ordered DEA staff to wire money slated for undercover stings to international accounts he and associates controlled. The money should’ve been carefully tracked by the DEA as part of undercover money laundering investigations, prosecutors said.

Irizarry has claimed the bank accounts in question amounted to a profit-producing “slush fund” for official and personal travel of federal law enforcement, U.S. prosecutors and confidential sources.

Dominguez said Irizarry accepted full responsibility for his actions but that his take of the conspiracy never surpassed $600,000.

At Thursday’s sentencing, Irizarry broke down in tears as he addressed the court, saying the biggest punishment was not being able to explain two his two young daughters why he would be going away for so long. He said when he became a federal law enforcement agent two decades ago he did so with a sense of great pride.

“Unfortunately, there came a time when I made a decision that went against the person who I was, that damaged my wife and embarrassed my country,” he said. “I should’ve known better and I didn’t. I failed.”