DETROIT (WXYZ)  — An emotional day in Detroit, where the family gathered to honor the life of three-year-old Chayce Allen, who was found dead inside a freezer Friday night. His mother is now charged in connection with his death. The family says they want him to be remembered for his life, not how he died.

Green and white balloons were released into the sky remembering Allen, a child the family describes as sweet, shy, and soft-spoken.

On Friday, Allen was tragically discovered decaying in a deep freezer at his mother’s home in Detroit.

“He did, he did not deserve to go through what he went through,” says Tyshanna France, Allen’s aunt.

France says she had custody of Allen when he was two months old when the mother of six had her children taken away.

“She should have never gotten her kids back after that,” says Azvante Sauls who is France’s sister.

Sauls says the last time she saw Allen in person was last summer and his head was bigger than his body. Sauls says she fought with her sister to take the child, but when she refused she claims the family called CPS and DPD for months, but they were told there was nothing they could do.

“Even when we tried our hardest, in this moment right now it feels like we didn’t try hard enough,” says Sauls. 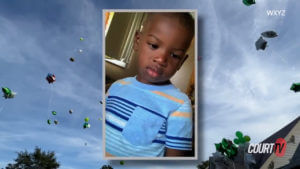 Last month Sauls says Chase, who went blind about a year ago, was burned. His mother told the family it was because he touched a cup of hot noodles but CPS got involved. Following the incident, Saul says the state was supposed to do three-month checkups, but she does not believe that happened.

Toni Haynes, who is France’s mother, says she is mourning the loss of her grandson and is sickened and outraged that he could have died at the hands of her own child.

“No that’s not my daughter, I brought a monster into this world and didn’t even know it,” says Haynes.

Azuradee France is due back In court on July 8 for a probable cause conference and will face a judge on the 15th. As for her other five children, they are now with family.

The family has now started a GoFundMe to cover funeral costs and help provide for his siblings.

This story was originally published June 27 by WXYZ in Detroit, an E.W. Scripps Company.