SAN JOSE, Calif. (AP) — The jury weighing fraud charges against former Theranos CEO Elizabeth Holmes will start their second week of deliberations Monday. Holmes faces 11 criminal charges alleging that she duped investors and patients by hailing her company’s blood-testing technology as a medical breakthrough when in fact it was prone to wild errors.

The eight men and four women on the jury have been meeting in a San Jose, California, federal courthouse after absorbing reams of evidence during a high-profile trial that has captivated Silicon Valley. The jurors deliberated for three days last week before adjourning Thursday afternoon for the holiday weekend. 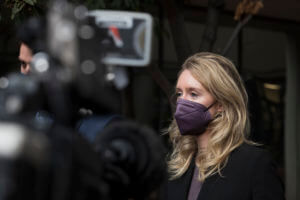 The case has attracted worldwide attention. At its core is the rise and fall of Holmes, who started Theranos as a 19-year-old college dropout and then went on to break through Silicon Valley’s male-dominated culture with her bold claims and fundraising savvy. She become a billionaire on paper before it all evaporated amid allegations she was more of a charlatan than an entrepreneur.

Holmes, now 37, spent seven days on the witness stand acknowledging she made some mistakes and decisions she regretted while staunchly maintaining that she never stopped believing Theranos was on the verge of revolutionizing health care.

Holmes spent years promising Theranos would be able to scan for hundreds of diseases and other health problems with just a few drops of blood taken with a finger prick instead of relying on vials of blood drawn from a vein.

It was such a compelling concept that Theranos raised more than $900 million and struck partnerships with major retailers Walgreens and Safeway. Holmes herself became the subject of cover stories on business magazines.

But unknown to most people outside Theranos, the company’s blood-testing technology was flawed, often producing inaccurate results that could have endangered the lives of patients.

After the flaws were exposed in 2015 and 2016, Theranos eventually collapsed and the Justice Department filed a criminal case in 2018 that charged Holmes with 11 felony counts of fraud and conspiracy.

If convicted, Holmes could face up to 20 years in federal prison.

The jurors have provided few clues about how their deliberations have been going so far. During their first week discussing the case, they sent two notes to U.S. District Judge Edward Davila.

Their first asked if they could take home the jury instructions to review them, a request that Davila swiftly rejected.

The other note prompted a replay of secret recordings from a Holmes presentation to prospective investors during a December 2013 conference call. In the recording, which was presented as evidence at trial, Holmes boasts about partnerships with established drug companies that hadn’t panned out and potential U.S. military contracts that never materialized because of problems with Theranos’ technology.

After listening to the recordings again on Thursday, the jurors left the courtroom without returning Holmes’ gaze from across the courtroom.