DETROIT (AP) — A former University of Michigan violin professor has been sentenced to five years in prison after pleading guilty to transporting a girl across states lines for sex.

A federal judge who sentenced Stephen Shipps, 69, on Thursday also ordered the Ann Arbor man to pay $120,000 in restitution to his victim, federal prosecutors said. Shipps offered an apology and his lawyer had asked for no prison time. 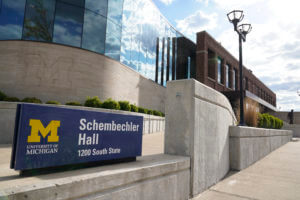 FILE – Schembechler Hall on the University of Michigan Campus in Ann Arbor, Mich., is shown May 14, 2021. A former University of Michigan violin professor has been sentenced to five years in prison after pleading guilty to transporting a girl across states lines for sex. A federal judge who sentenced 69-year-old Stephen Shipps on Thursday, April 14, 2022 also ordered the Ann Arbor man to pay $120,000 in restitution. (AP Photo/Paul Sancya, File)

The girl was born in 1985, according to court documents.

Shipps’ indictment in October 2020 and arrest in Ann Arbor came two years after the university placed the longtime professor on paid leave after former students accused him of sexual misconduct while he taught them in the 1970s and 1980s in Nebraska and North Carolina.

James C. Harris, III, acting special agent in charge of Homeland Security Investigations in Detroit, said he hopes Shipps’ sentence “sends a powerful message to others in positions of trust that if you prey on the vulnerable you will be held accountable for your actions.”

The University of Michigan has faced intense scrutiny over how it protects people on the campus from sexual misconduct. The school was rocked by allegations that began to publicly surface in 2020 from hundreds of men who said they were sexually assaulted by the late Robert Anderson, who was a campus doctor for nearly 40 years. He died in 2008. In January, the school announced a $490 million settlement with Anderson’s accusers.

Shipps taught at the University of Michigan’s School of Music, Theatre and Dance from 1989 until his retirement in 2019. He also directed a preparatory program that offered musical instruction to children.

Shipps also served on the faculties of Indiana University, the North Carolina School of the Arts, the University of Nebraska–Omaha, and the Banff Centre in Canada, federal authorities said.