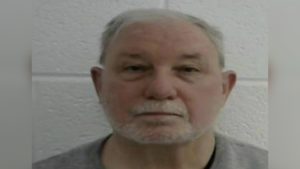 According to officials, 69-year-old David M. Crawford is facing numerous charges in connection with a series of incendiary fires of homes, vehicles and residential garages since 2011.

There are twelve arson fires at the center of the case. The fires took place in Prince George’s County, Montgomery County, Howard County, Frederick County and Charles counties from 2011 to 2020.

Officials say the arsonist exhibited a similar pattern of behavior to set the fires and that there was a similar, but very generic vehicle description, a silver sedan, in several of the cases.

The break in the case came shortly after the last known fire in 2020 when a link between the victims was discovered and that eventually led investigators and detectives to Crawford.

An investigation determined that the structures and vehicles Crawford intentionally set on fire were connected to individuals who he had previous disagreements with.

In six of the arsons, the victim and their families were inside their homes asleep.

The attempted murder charges arose out of the fact that there were clear signs the residents were inside the homes at the time Crawford set fire to the structures.

Crawford last served in 2010 when he resigned as Chief of City of Laurel Police Department.

Laurel Mayor Craig A. Moe released a statement on the arrest of Crawford:

Former City of Laurel Police Chief David Crawford was arrested today on numerous charges of arson and attempted murder in connection with at least 12 fires since 2011.

Two of the victims include retired City of Laurel Police Chief Richard McLaughlin and Former City Administrator Marty Flemion. Two Arson Task forces and police and fire investigators from multiple jurisdictions collaborated on the cases against Crawford, who resigned as City of Laurel Police Chief on December 1, 2010. In six of the arsons, the victims were in their homes– asleep with their families.

These allegations are troubling and quite serious, and if proven true, members of our City of Laurel family have been victimized. And I want to say, that our thoughts and prayers are with them, and their families as this case proceeds.

The City of Laurel will continue to cooperate with investigators from multiple agencies involved in this ongoing criminal investigation.

This story was first published by Kelly Broderick at WMAR in Baltimore, Marlyand.