ST. LOUIS (AP) — A former St. Louis police officer who was set to plead guilty in the 2017 beating of a Black colleague who was working undercover is now taking his case to trial.

A judge on Monday scheduled Christopher Myers’ trial on a federal charge of destruction of evidence for May 2, the St. Louis Post-Dispatch reported. He had been set to plead guilty Tuesday to a misdemeanor charge of deprivation of rights, in which he would have admitted to damaging Detective Luther Hall’s phone on the night Hall was beaten by fellow officers. 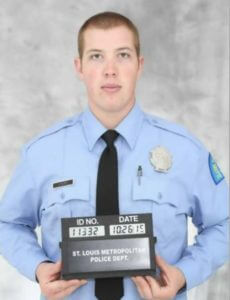 Myers, who is white, would have agreed to a sentence of probation in the deal. Now, Myers faces years in prison if he’s convicted.

Myers announced his change of mind about the plea agreement after U.S. District Judge E. Richard Webber recused himself from Myers’ case last week. Webber did not list a reason for his recusal.

Two juries in separate trials last year were unable to reach a verdict in cases where Myers faced charges of destruction of evidence. In his first trial, Myers was acquitted of a civil rights violation count.

Myers was one of several now-former officers charged in Hall’s beating. Randy Hays was sentenced last year to more than four years in prison after pleading guilty in 2019 to using unreasonable and excessive force in the beating. Dustin Boone was convicted last year of deprivation of rights under the law and sentenced in November to one year and a day in prison. Bailey Colletta was sentenced to three years’ probation for lying to the FBI and a grand jury about the beating.

Last year, a jury acquitted former Officer Steven Korte of charges of deprivation of rights under color of law and of lying to the FBI about the attack.

Prosecutors have said the officers mistakenly believed that Hall was participating in a protest in September 2017 following the acquittal of Jason Stockley, a white officer accused of fatally shooting a Black man following a high-speed chase. Hall required multiple surgeries after the beating, which he said left him with permanent damage. He settled a lawsuit against the police for $5 million.