BEREA, Ohio (WEWS) — At haunted houses, the blood, knives, and spooky monsters are fake, but the frightful fun became all too real for one Ohio family after one of the actors got a little too into character at a haunted house in Berea.

Berea officers were called to the 7 Floors of Hell haunted house at the Cuyahoga County Fairgrounds at about 8:15 p.m. on September 18 for a call of a male stabbed in the foot, the report states.

Officers spoke to staff members and learned that an 11-year-old boy there with a family friend suffered a cut on his left big toe. Witnesses told officers that one of the roaming outside actors at the haunted house was using a large Bowie knife as a prop to scare people. They said the 22-year-old actor, identified as Christopher Pogozelski, was scraping the knife on the ground in front of them, then began to stab the ground at the boy’s feet when it went through his Croc-style shoe and cut his left foot.

Karen Bednarski told WEWS the 11-year-old boy is her son, Frank. She said he went to the 7 Floors of Hell haunted house that Saturday with his sister and family friends with hopes of having some good, scary fun.

But she says things turned just plain scary when they encountered one of the actors outside.

“He walked up to my son and he was holding the knife and his intentions were to scare him, but my son responded to him by saying, ‘That’s fake. I’m not scared,’” said Bednarski. 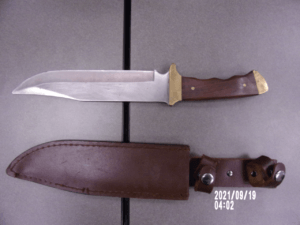 A bowie knife that was confiscated from a haunted house actor Sept. 18 after he accidentally stabbed an 11-year-old boy in the toe, according to a Berea police report. (Berea Police Department via WEWS)

That’s when Bednarski said Pogozelski began stabbing the ground with a large Bowie knife, but then got too close and stabbed the knife through Frank’s Croc sandal, slicing the side of his big toe.

Bednarski said one of the adults with Frank called her and then she called police.

But she wasn’t just upset about the cut on Frank’s toe, it’s how she said the staff responded afterwards.

“They told me that they were not certified to administer first aid,” said Bednarski.

Officers confiscated the knife from the actor, who told police he had brought it from home, and he was using it instead of the provided prop knives. He admitted to officers that “using the knife was not a good idea and that the injury was an accident,” the report states. The knife was confiscated and taken as property in connection with the incident.

Bednarski doesn’t believe it was an accident, but Rodney Geffert, the president of Night Scream Entertainment, which owns 7 Floors of Hell, said it was.

“I guess he got a little too close. It was a complete accident and poked the boy’s toe,” said Geffert.

Geffert said Pogozelski is a popular actor at other haunted houses in the area and started working freelance at 7 Floors of Hell last year.

He said his actors are not allowed to touch customers and can only use the rubber props provided by the company, but Pogozelski went back to his car that night and grabbed the Bowie knife that night without their knowledge.

“The police took the knife and I made it real clear with him, you don’t go to your vehicle and get something out like that. We just don’t do that,” said Geffert.

The group continued through the haunted houses that night, but Bednarski and Geffert have differing accounts on why.

Geffert said Bednarski asked for a ticket and seemed excited to go into the haunted houses, but she denied that and said they were offered to her because she didn’t want to leave her son, who didn’t want to go to a hospital for further medical treatment and wanted to continue on with the night.

“I didn’t want to make a scene, of course. I wanted to go about it the appropriate way,” said Bednarski. 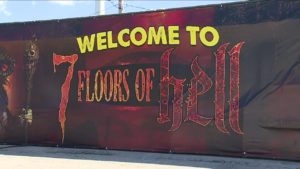 Officers were told that Pogozelski’s mother asked for the knife back, but they told dispatch to tell her that the knife would be in police property if needed for a criminal case, and it would be released at a later date.

Police later contacted Bednarski who decided that she would like to pursue charges. Police advised her to come to the station to sign the charge of negligent assault. A summons was sent to Pogozelski.

“The biggest thing for me is, you know, I don’t understand the mental state of this man,” said Bednarski. “There’s got to be something wrong with him, and he should not be working at an establishment like that. That’s what makes me upset,” said Bednarski.

Lt. Tom Walker with the Berea Police Department confirmed to WEWS that Pogozelski has been charged.

“I can’t explain why he brought the real knife,” Walker said. “He should have been using a fake prop or rubber, rubber knife. Obviously a poor decision on his part to bring a real knife to the fairgrounds. And he’s been criminally charged with negligent assault as a result of making that decision.”

Geffert said he will have to make a decision about whether to keep him employed at 7 Floors of Hell.

This story was originally published September 24, 2021, by WEWS in Cleveland, an E.W. Scripps Company.