BALTIMORE (WMAR) — A man formerly detained in a Baltimore detention facility is now suing the State of Maryland, Mayor and City Council of Baltimore, and Maryland correctional officers.

While awaiting trial for an alleged gun offense, the victim was doused with hot water and stabbed in his sleep.

He asked WMAR-2 News not to identify him because he’s concerned about retaliation from his attackers, who weren’t charged. 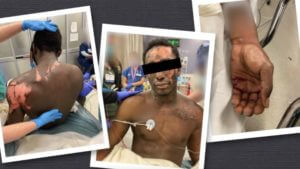 The victim is now seeking damages for the emotional and physical trauma he suffered and blames state and city officials for failing to protect detainees and properly investigate assaults.

“I was supposed to just do my time and leave, not come home burnt,” the victim said.

The attack took place on June 10, 2021 at the Metropolitan Transition Center in Baltimore. While it lasted a few minutes, the damage inflicted hasn’t yet healed.

“The names certain people were calling me before I left, it did break me,” he said.

His flesh blistered. His basic senses were temporarily and permanently disabled.

“It’s a little blurry in and out, here and there,” he said. “I usually can hear somebody whispering, I can barely hear that. It put me in a state of depression like would I ever look the same again? Because I didn’t know if my skin was going to come back.”

In the year and a half since the attack, he continues to pay a price including medical expenses, pain, mental anguish, and lost wages. However, the people responsible for harming him have not.

He now wants the State of Maryland and City of Baltimore to pick-up the tab.

Recently, his attorney filed a lawsuit accusing more than 50 defendants of failing to do their jobs by not providing care, safekeeping and protection to detainees; not hiring enough staff to uphold those duties; and failing to adequately train, supervise, and discipline employees in preventing and stopping inmate assaults.

Following a 4-month lapse in the investigation, a new detective assigned to the case discovered video footage initially used to identify the suspects was never saved or recorded. And videos of the incident were cellphone recordings of the institution’s video surveillance and had poor quality.

But McDonald said the fact that this could happen is due to inadequate staffing and supervision.

“As I piece through the documents, the FOIA requests, there are probably about three individuals on staff and probably about 50-60 inmates,” McDonald said. “You need to staff that facility a lot better than what you did in this situation.”

And he believes these shortcomings add up to a billion-dollar payout.

According to the lawsuit, the victim is seeking pecuniary damages to fully compensate for medical treatment, compensatory damages in an amount greater than $75,000, punitive damages in the amount of $20 million for each defendant, plus attorney’s fees.

He’d then like to direct that attention to reforming the state’s prison system.

“My hope is that people like my client’s mom and my client don’t have to worry when a person goes to jail, particularly when a person goes to jail pre-trial. They don’t have to worry about their sons or daughters being assaulted, their fathers, uncles being assaulted and being permanently disfigured when they go into a jail or into any facility,” said McDonald.

WMAR-2 News asked the Department of Public Safety and Correctional Services for their response to the lawsuit and detail on any changes at the facility following the incident.

“The Department’s top priority is always the safety of its employees and its incarcerated men and women. Every decision made—-from programs to staffing to movements—- is based first and foremost on security and safety.

All allegations of assault are immediately investigated by highly trained DPSCS detectives, who are experienced in conducting correctional investigations.

Sofastaii also filed a Maryland Public Information Act request for video of the incident and emails between the investigating officers. Both requests were denied.

While the Detective assigned to the case noted that the cellphone recording quality was poor and “no distinguishing features or marks are able to be observed,” the Department said video recordings “may jeopardize the security of any building, structure or facility.”

The Department also denied requests for emails between the detectives and their notes, because they’re “part of an open and on-going investigation.”

However, in the investigative findings, the detective determined that probable cause had not been established to identify or charge any suspects in this case and submitted his report on January 25, 2022.

This story was originally published Sept. 7, 2022 by WMAR in Baltimore, an E.W. Scripps Company.