INDIANAPOLIS (WRTV) — One of the men charged in connection to a May 2019 shooting of judges outside a downtown Indianapolis White Castle restaurant has been found guilty of aggravated battery and other crimes.

Brandon Kaiser was convicted on seven out of eight felony charges and one misdemeanor by a jury after a three-day jury trial. 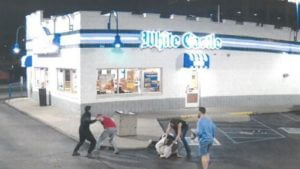 David Margerum, Kaiser’s attorney, told WRTV that Kaiser was taken into custody after the verdict.

According to court documents, Clark County Circuit judges Brad Jacobs and Andrew Adams were shot and wounded in the early morning hours on May 1, 2019 in the White Castle parking lot.

During an altercation, shots were fired, striking Jacobs and Adams.

Kaiser was one of the men charged in the incident.

In 2020, Kaiser’s attorney’s filed documents with the court that Kaiser and his friends were acting in self defense against the group of judges.

Court documents filed in October 2019 claimed that Crawford County Judge Sabrina Bell, who was with Jacobs and Adams at the time, flipped off Kaiser and his friend as they drove by the White Castle. Bell also told investigators that she may have said something to “egged on” Kaiser and his friend.

Adams accepted a plea agreement to plead guilty to battery resulting in bodily injury in September 2019. Under the plea agreement, prosecutors agreed to dismiss six additional charges against Adams. He received a suspended sentence of 365 days. Adams has also petitioned to be reinstated to the bench.

On October 11, 2019, the Indiana Commission of Judicial Qualifications filed disciplinary charges against the three judges involved.

Jacobs and Bell were both reinstated to the bench in December of that year after serving 30-day suspensions. Adams was ordered to serve a 60-day suspension.

This story was originally published Sept. 21, 2022 by WRTV in Indianapolis, an E.W. Scripps Company.