KIGALI, Rwanda (AP) — The terrorism trial of the man who inspired the film “Hotel Rwanda” can be held in Rwanda, a judge there ruled Friday, rejecting Paul Rusesabagina’s argument that a court there cannot try him because he is no longer a citizen. 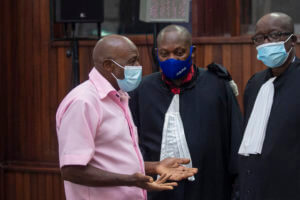 Paul Rusesabagina, who inspired the film “Hotel Rwanda” and is credited with saving more than 1,000 people by sheltering them at the hotel he managed during the genocide, speaks to lawyers as he attends a court hearing in Kigali, Rwanda, Friday, Feb. 26, 2021. The judge on Friday rejected Rusesabagina’s argument in his terrorism trial that a court there cannot try him because he is no longer a citizen. (AP Photo/Muhizi Olivier)

Rusesabagina’s lawyer, Gatera Gashabana, said his client will appeal the decision about jurisdiction and present further arguments. “We cannot go ahead with the hearing of the case without having our objection heard,” he said.

Rusesabagina has argued he is a Belgian citizen who was kidnapped and taken to Rwanda, a country he left in 1996. The judge, however, said the court does not find it relevant to talk about how he was detained.

Rusesabagina disappeared during a visit to Dubai in August and appeared days later in Rwanda in handcuffs, accused of supporting the armed wing of his opposition political platform, which has claimed responsibility for deadly attacks.

He faces nine charges including the formation of an irregular armed group; membership in a terrorist group; financing terrorism; and murder, abduction and armed robbery as an act of terrorism. If convicted, he could face more than 20 years in prison.

His family says Rusesabagina, praised for saving ethnic Tutsis during Rwanda’s 1994 genocide and awarded the U.S. Presidential Medal of Freedom, has no chance at a fair trial because of his outspoken criticism of longtime Rwandan President Paul Kagame and human rights abuses. They fear he might die from poor health behind bars.

Rusesabagina is credited with saving more than 1,000 people by sheltering them at the hotel he managed during the genocide in which more than 800,000 Tutsi and Hutus who tried to protect them were killed. Rwanda’s government has long asserted that Rusesabagina’s role in the genocide was exaggerated.

The U.S. State Department on Thursday said it has engaged with Rwanda’s government at the “highest levels” about the case of Rusesabagina, a U.S. permanent resident.

The court on Friday found that both Rwanda and Belgium have the jurisdiction to try him, but “there is no justification for his trial to be moved from Rwanda to Belgium as he requested.“

The prosecution has argued that Rusesabagina is Rwandan by origin and that local laws allow the prosecution of non-nationals who commit crimes on Rwandan soil.

The court gave his lawyer until Wednesday, when court resumes, to submit any new objections. The court will rule on them next Friday.

The court also heard that some of Rusesabagina’s co-accused were brought from neighboring Congo to Rwanda without an extradition process.

Kagame in an interview with CNN that aired this month asserted that Rusesabagina is a citizen who had done something terribly wrong. The president added it was important that he and his co-accused receive a fair trial.