A Texas couple killed in 1981 has been identified 40 years later, but their child is still missing. 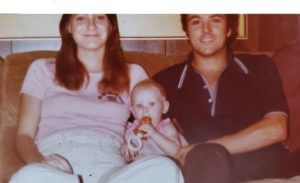 Family photo of Tina Gail Linn, Hollie Marie Clouse, and Harold Dean Clouse. Murdered in 1980 and discovered in early 1981, Hollie’s body was never found and it is possible she is still alive. (Hand-out/Identifinders International)

Their child, Hollie Marie, who was one at the time of the murders, is still missing.

The newlywed couple, who married in June 1979, was found in a wooded area in Houston on Jan. 12, 1981, after a dog discovered the remains.

According to the news release, the couple left their home in Volusia County, Florida, in 1981 with their baby so Dean could pursue carpentry work in Texas.

The couple’s car was soon returned to the family, who believed the couple had joined a religious group and no longer wanted contact.

Years went by without the bodies being identified, but in 2011, their bodies were exhumed by Identifinders International.

In 2021, a true-crime podcast funded the genealogy research, and within days, the bodies were identified of that as the Clouses.

According to the press release, no Baby Doe cases have been found to match Hollie’s description.