LOS ANGELES (AP) — In the stunning climax to “The Jinx: The Life and Deaths of Robert Durst,” the New York real estate scion is caught on a live microphone muttering to himself, “killed them all, of course.”

Prosecutors at Durst’s murder trial only have to prove he killed one person: best friend Susan Berman. But they’re not taking any chances. They’ve presented evidence that he also killed his wife and that the shooting death of a Texas neighbor was no accident.

After months of testimony and evidence spanning four decades, prosecutors make their case to the jury Wednesday in Los Angeles Superior Court that Durst, 78, silenced Berman in December 2000 before she could tell authorities how she provided a phony alibi when his wife disappeared in 1982.

There is no forensic evidence to tie him to Berman’s killing case, but circumstantial evidence, incriminating statements he’s made — including on the witness stand — damning testimony from friends and his ill-considered decision to participate in “The Jinx” has bolstered the prosecution’s case.

“If Robert Durst gets acquitted on this case, I will be shocked along with the rest of the world,” said Los Angeles attorney David Ring, who has been watching the case. “The evidence is beyond overwhelming that not only did he murder Susan Berman, but that he murdered his first wife, Kathie Durst, and also Morris Black. I mean, he got away with two murders, he’s trying to get away with a third; it’s not going to happen.”

Durst has been behind bars since his New Orleans arrest in 2015 that came on the eve of the final episode of “The Jinx” in which he was caught in a lie about writing a note directing police to Berman’s lifeless body. The FBI arrested him before he could watch the conclusion and either flee or kill himself, as he testified he planned to do.

The trial went on hiatus after only a few days in March last year when the coronavirus pandemic closed courts. It resumed in May and testimony wrapped up last week with Durst concluding three weeks on the stand in which he denied killing his wife and Berman but also said he’d lied if he had done so.

The judge remarked outside the jury’s presence that cross-examination had been devastating and appeared to have destroyed Durst’s credibility.

Durst stuck to his story that he had only killed one person — Black — in a 2001 struggle for a gun in the Galveston, Texas, boarding house where he was living under an alias. Durst was acquitted of murder after testifying in that case, though he was convicted of destroying evidence for chopping up Black’s body and tossing it out to sea.

LA prosecutors said Durst knocked off Black because the neighbor discovered his true identity while he was hiding from New York authorities reinvestigating Kathie Durst’s disappearance. 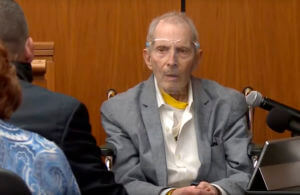 Prosecutors presented evidence Kathie Durst, who was finishing medical school, was on the brink of seeking a divorce from an abusive husband she once described as “homicidal,” according to one witness. The defense portrayed her as having a cocaine problem and unable to complete her classes.

But friends, fellow students and former professors said she was committed and hard-working and despite some absences was nearing graduation. Robert Durst testified he drove her from their lake house in Westchester County to a train bound for New York City the night before she was to start a clerkship in pediatrics, the area she hoped to specialize in.

The dean of students at Albert Einstein Medical School testified that he got a call from a woman who identified herself as Kathie who said she had diarrhea and wouldn’t be able to make it to the pediatric clerkship that day. Prosecutors said a student wouldn’t call the dean to report an absence and said Berman impersonated Kathie on the call to provide an alibi for Robert Durst.

Durst’s story was inspiration for the 2010 feature film “All Good Things,” starring Ryan Gosling as him and Kirsten Dunst as his wife. Durst felt it provided a sympathetic portrayal of him, so he reached out to filmmaker Andrew Jarecki and agreed to be interviewed for a project became “The Jinx.”

The filmmakers unearthed a letter he once sent Berman that had handwriting identical to the note police received after her death that only included the word “cadaver” and her address. Beverly Hills was misspelled “Beverley” in both instances.

Durst had once said the cadaver note could only have been written by her killer. Faced with the similarities and experts who would testify they were the same, the defense conceded before trial he wrote the note.

He testified he had found Berman dead in her house and wanted to alert police to her body without anyone knowing he had been there.

Durst testified that the statement he made to himself off camera at the end of production was not a confession — as many interpreted it. He said he either spoke too softy for the mic to hear or failed to utter what he was thinking: “They’ll all think I killed them all, of course.”

“Fortunately for Mr. Durst, they failed to deliver the required evidence to support their script/theory,” attorney Chip Lewis said Tuesday. “In our beautiful country, we do not convict folks based on made-for-tv-movies.”