WICHITA, Kan. (AP) — A Wichita man who is accused of trying to kill his girlfriend and then shooting their 2-year-old child when she escaped was charged Tuesday with more than a dozen crimes. 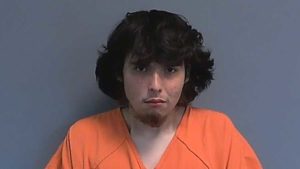 Kamden Campos, 21, was arrested July 19 after authorities say he convinced his girlfriend to take their two daughters to Cheney Reservoir and then tried to kill her and shot at the car when she tried to escape.

A 2-year-old girl was shot in the back and an 8-month-old was unharmed. The girl underwent surgery but is expected to survive, The Wichita Eagle reported.

Campos, 21, made his first appearance in court Tuesday. He was charged with six counts of attempted premeditated murder, three counts of aggravated battery, two counts of criminal threat and one count of aggravated kidnapping, court records show.

Campos is jailed in the Reno County Jail on $2.1 million bond.