PIERCE TOWNSHIP, Ohio (WCPO) — Police in Pierce Township, Ohio are investigating a homicide after a woman found her fiancé dead in a storage unit on their property.

According to police, 43-year-old Kenneth Michael Eva’s fiancé last saw him alive before she left for work Monday morning. A short time later, she got a call from Eva’s boss informing her that he didn’t show up for work. When she went home to check on him, she discovered his body in a storage unit. 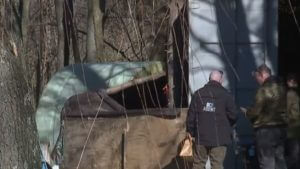 “I don’t know if he passed out. I think he did,” his fiancé hysterically told the 911 operator. “There’s blood everywhere. Please please hurry. I think he’s dead.”

The 911 operator talked the woman through CPR and chest compressions while they waited for EMS and police to arrive.

First responders arrived at the home. According to investigators, they quickly determined that the man was dead.

“It appears a sharp edge weapon was used. There were multiple lacerations on the body and a lot of blood at the crime scene,” Pierce Township Police Chief Paul Broxterman said at a press conference Wednesday.

The coroner ruled Eva’s death a homicide. The chief said there is no threat to the public and that this was not a random act of violence.

“There appeared to be a reason why the suspects were at the scene,” Broxterman said.” I really can’t go into a lot about that.”

The chief did not go into detail about the suspects, but he said that Eva’s fiancé is not currently a suspect.

“She has been very cooperative, and she’s going through a rough time,” Broxterman said.

Broxterman added that due to the amount of evidence found on the scene, he is confident that this homicide can be solved.

Michael Steelman lives across the street and told WCPO he was shocked to learn about the tragedy.

“I saw the police, didn’t know what was going on. Only for me to come back and find out someone was murdered. Yeah… wasn’t expecting that,” Steelman said.

Anyone with information regarding Eva’s death is asked to call the Pierce Township Police Department at 513-752-4100.

This story was originally published Nov. 30, 2022 by WCPO in Cincinnati, an E.W. Scripps Company.