41-year-old Natalia Aleksandrovna Hitchcock attended her initial appearance in Sheboygan County Court on Tuesday, during which she looked back and spoke directly to her husband who was visibly emotional. It was her husband and the victims’ father who tried to save his son and called 911 after the mother allegedly attacked the boy.

A criminal complaint released Tuesday states police officers were called to an apartment on Plank Trail Lane just before 5 p.m. on March 30 for a report of a possible stabbing of an 8-year-old and that a woman wanted to kill herself.

At the building, the husband and father – who was visibly upset – directed officers to the living room of the apartment, where officers found the boy unconscious laying on his back. The complaint states officers found bruising around his neck consistent with strangulation. The child later regained a pulse and was brought to a local hospital.

First responders later brought the child to Children’s Hospital in Milwaukee, where he died. Doctors there also concluded he died from strangulation, the complaint states.

Officers found the defendant, Natalia Hitchcock, in the apartment. The father said she had tried to attack him and that she had stabbed herself, the complaint states. Officers also learned a second child, an 11-year-old boy, had been at the home at the time of the incident.

The father told police that the mother had been drinking and that she has had “surges of rages.” The father said Hitchcock’s mother lived in Russia and that he was worried about Hitchcock’s mental state of mind as she watched the war between Russia and Ukraine.

In the complaint prosecutors relay how the father described her mental condition before the alleged murder:

“Within the last prior few days Hitchcock also wanted to buy survival gear such as a camping stove and fuel and also wanted to buy knives and guns. He said no to the knives and guns, but did go and purchase extra food as well as a camping stove and fuel with Hitchcock to make her feel safe. He advised that Hitchcock also complained that she could not book a flight to Russia to see her parents, which made her angry. He said that he felt the war between Russia and Ukraine amped up Hitchcock more than ever and that she started to drink alcohol. Witness 1 also advised that Hitchcock was worried that people were going to be coming from a bigger city to attack them.”

The father says on March 30 both kids were home on spring break. He told police he remembers that Hitchcock’s mother had called to speak with her that day. After waking up from a nap the father remembers the 11-year-old child was yelling that the 8-year-old child was dead. The father also remembered the mother saying “I killed [the child]” according to the complaint.

Prosecutors say the father picked up the lifeless body, walked to the living room and placed him on the couch. He tried to give CPR to the boy and called 911. 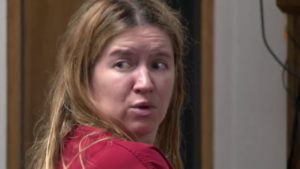 While the father was attending to the child, he remembers the mother walking around the apartment with a knife, looking dazed, and saying she was going to kill everyone in the house, the complaint states. He remembered the mother carrying a 5-6 inch knife and pointing it towards herself. The father says he didn’t know if she was going to stab herself so he wrestled the knife away, according to the complaint.

The father told officers Hitchcock had not been diagnosed with any mental health disorders.

Officers later noticed Hitchcock had a small puncture wound in her chest. She admitted to police then it was self-inflicted. When asked why she stabbed herself, police say she responded, “she tried to, ‘cut her heart.'”

The complaint describes what happened, according to Hitchcock:

The complaint states she told police that day she “did not have control of her thoughts and heard voices in her head,” and “she began to have thoughts that the Russian government was going to take her children and abuse them.”

According to the complaint:

“She said that after laying Victim 1 down on the floor after the suffocation she wanted to end her life, but Victim 2 showed up in the bedroom. She advised that she already had so much Tylenol in her system and thought she was just going to go to sleep. She said that she thought to herself that she wanted to use a knife to kill herself as she thought people were going to get her and Victim 1 and also said that Victim 2 was finally going to be safe from all of it. When asked if she planned on killing Victim 2 as well, Hitchcock said no. She said that Victim 2 was bigger than Victim 1 and that it would have been very difficult for her to have killed Victim 2.

Detective Hatch asked Hitchcock if she ever tried to do anything to Victim 2 in a bathtub and if she tried to hurt Victim 2 over the weekend. She said she, “Kinda dipped him in the water and I didn’t do anything like bad to him.” She said that she told the boys they needed to wake up and needed to see what was going on around them. She stated that she did not want to end Victim 2’s life by dunking him underneath the bath water; she just want to scare him. She said that she dunked his head under the water to scare him so that he would understand his life was in danger. When asked why she killed Victim 1 and not Victim 2 as well, Hitchcock said that Victim 1 was so little and so innocent and she did not want him to suffer.”

When law enforcement informed her while she was in jail that her son had died, the complaint states her reply was:

“’Well, I guess I accomplished what I set out to do then.’ Shortly thereafter she began to cry softly and said she did it because she was concerned that her son was going to be sexually assaulted and she felt he would be better off dead.”

The 11-year-old boy told an interviewer with the Lakeshore Regional Child Advocacy Center that on March 29, he, his brother and his mom were in the bathroom. He said when he was in the bathtub his mother asked him to put his head under water “to see how long he could stay under.” He said as he put his head underwater, he could feel his mother’s hands on him, pushing him down. He said it felt like her whole body was pushing him down, the complaint states. 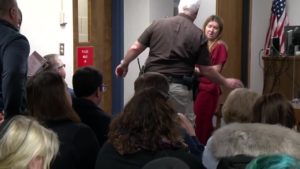 At some point he said he was able to get out from under her. He left the bathroom and later found his mother with a knife. He started screaming at her and tried to stay away. He said the mother put the knife away and then hugged him, and that the rest of the day was normal.

As Hitchcock was escorted out of court she apologized.

“I’m so sorry. I don’t know what happened,” Hitchcock said while looking at her husband.

Hitchcock’s next court date is April 7. Her bond was set at $1 million.

This story was originally published April 5 by WTMJ in Milwaukee, an E.W. Scripps Company.