Two of the men charged in the murder for hire case that led to the 2018 killing of a Vermont man are now facing federal wire fraud charges, court records show.

Serhat Gumrukcu and Berk Eratay are due in appear in U.S. District Court by video next week to answer the charges contained in an updated indictment filed earlier this month by federal prosecutors. 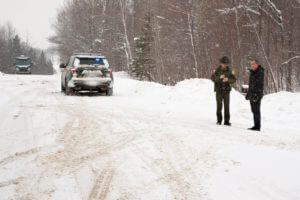 The two men are also charged with arranging for the kidnapping and murder of Gregory Davis, who was taken from his Danville home on Jan. 6, 2018. His body was found the next day in a snowbank about 15 miles (24 kilometers) away. He had been shot to death.

Both Gumrukcu and Eratay have pleaded not guilty to the earlier charges. They are both being held without bail.

Prosecutors have alleged that Davis was killed because he was ready to go to the FBI to complain that Gumrukcu was failing to live up to his obligations in an oil trading deal.

A third suspect, Jerry Banks, 35, of Fort Garland, Colorado, is charged with kidnapping and killing Davis, but he was not charged with wire fraud.

The latest indictment outlines how prosecutors say that over several years Gumrucku and Davis, working through a middleman, were trying to arrange an oil trading deal that began in 2015. Later after Gumrukcu failed to live up to his financial obligations, Davis’ company Mode Commodities and a company controlled by Gumrukcu called Lauran Trading, agreed to pay Davis $5 million over time, the indictment says.

Among the fraudulent messages allegedly sent to Davis by Gumrukcu and Eratay, were messages that falsely represented that Lauran Trading had $30 million available for oil trading from a bank in the Persian Gulf.

In 2017, Gumrukcu was also putting together a different deal through which he obtained a significant ownership stake in Enochian Biosciences, a Los Angeles based biotechnology company. Prosecutors have said that if Davis would have complained to the FBI about Gumrukcu it could have jeopardized the biotechnology deal.

Ethridge has since pleaded guilty.