INDIANAPOLIS (SCRIPPS) — Eight people are dead and five others remain hospitalized after a mass shooting Thursday night at the FedEx Ground-Plainfield Operation Center in Indianapolis.

Officers with the Indianapolis Metropolitan Police Department were called around 11 p.m. on the report of shots fired at the FedEx facility in the 8900 block of Mirabel Road in Indianapolis. 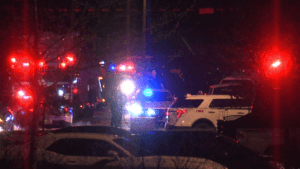 This photo from WRTV shows police outside a FedEx facility in Indianapolis on Thursday, April 15. Eight people were shot and several others were injured before the gunman killed himself. (WRTV)

IMPD Deputy Chief Craig McCartt said officers arrived to a “chaotic and active crime scene.” McCartt said it appears the gunman began firing randomly outside the facility and then entered the building where he continued shooting.

Four people were found dead outside and another four were killed inside the FedEx facility, McCartt said. The suspect was also found dead after he died by suicide.

At least five people remain hospitalized with injuries. Their conditions and details about their injuries have not been released.

Police said there is no ongoing threat to the community.

“We are deeply shocked and saddened by the loss of our team members following the tragic shooting at our FedEx Ground facility in Indianapolis,” a statement from FedEx read. “Our most heartfelt sympathies are with all those affected by this senseless act of violence. The safety of our team members is our top priority, and we are fully cooperating with investigating authorities.”

Anyone who was at the scene but left is asked to call Crime Stoppers of Central Indiana 317-262-TIPS or contact homicide detectives at 317-327-3475.

Those who are scheduled to work at the facility later in the day should contact their supervisors. The facility will be closed for several hours while detectives, including the Federal Bureau of Investigation, investigate at the scene.

“We were asked by IMPD to assist in the investigation and we will be looking for any federal nexus,” an FBI spokesperson for the FBI told WRTV.

This story was originally published April 16, 2021 by Andrew Smith of WRTV in Indianapolis.
MORE NEWS