ATLANTA (AP) — Atlanta police officers called out sick Thursday to protest the filing of murder charges against an officer who shot a man in the back, while the interim chief acknowledged members of the force feel abandoned amid protests demanding massive changes to policing.

Interim Chief Rodney Bryant told The Associated Press in an interview that the sick calls began Wednesday night and continued Thursday, but said the department has sufficient staff to protect the city. It’s not clear how many officers have called out.

“Some are angry. Some are fearful. Some are confused about what we do in this space. Some may feel abandoned,” Bryant said of the officers. “But we are there to assure them that we will continue to move forward and get through this.”

Prosecutors brought felony murder and other charges against Garrett Rolfe, a white officer who shot Rayshard Brooks after the 27-year-old black man grabbed a Taser during a struggle and ran, firing it at the officer, Fulton County District Attorney Paul Howard said.

Howard said Brooks was not a deadly threat at the time and that the officer kicked the wounded man and offered no medical treatment for over two minutes as he lay dying. Another officer, Devin Brosnan, who the district attorney said stood on Brooks’ shoulder as he struggled for his life, was charged with aggravated assault and violation of his oath. 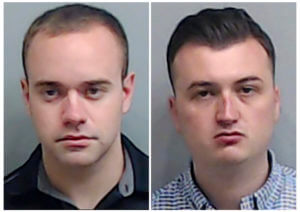 These booking photo made available Thursday, June 18, 2020, by the Fulton County, Ga., Sheriff’s Office, shows Atlanta Police officers Garrett Rolfe, left, and Devin Brosnan. Rolfe, who fatally shot Rayshard Brooks in the back after the fleeing man pointed a stun gun in his direction, was charged with felony murder and 10 other charges. Rolfe was fired after the shooting. Authorities have charged Brosnan with four counts, including aggravated assault in the shooting death of Brooks. (Fulton County Sheriff’s Office via AP)

Rolfe and Brosnan both contend their actions were justified and turned themselves in Thursday. Jail records show Brosnan was released on a $30,000 signature bond, meaning he only has to pay if he fails to show up for court, while Rolfe was being held without bond. Rolfe has been fired and Brosnan placed on desk duty.

The decision to prosecute the officers came less than five days after the killing rocked a city — and a nation — still reeling after George Floyd’s death at the hands of police in Minneapolis set off nationwide protests that have urged an extensive rethink of policing and an examination of racism in the United States.

L. Chris Stewart, a lawyer for Tomika Miller, Brooks’ widow, told reporters the charging of the officers brought the family no joy.

“Some people thought that we’d be happy and be celebrating and have a fist in the air, but it’s more a disappointment that this is the state of policing and this is where we’re at,” he said.

Bryant, who took over after the previous chief resigned in the wake of the shooting, wore a navy blue shirt Thursday, rather than the white shirt typically worn by command staff, to show solidarity with the officers.

In the roughly three weeks since protests of Floyd’s killing first broke out in Georgia’s capital, officers have worked shifts of 12 or more hours and have been yelled at, spit on and had things thrown at them, Bryant said.

“At some point, people get tired, I recognize that, and physically exhausted,” he said. “We will definitely get beyond it, and I’m certain that we will see our sick-outs drop back to normal, average.”

The weeks since Floyd’s killing have seen lawmakers pass police reforms, Americans reconsider statues commemorating controversial figures, and ideas like defunding police become part of the national conversation. The largest labor group in the Seattle area voted to expel the city’s police union Wednesday, saying the guild representing officers failed to address racism in its ranks, and California’s police chiefs on Thursday endorsed a plan to more aggressively weed out cops who break the law or have a history of complaints.

But the drive for change has also drawn pushback, and divisions over the role police should play are becoming a major political flashpoint.

Georgia Gov. Brian Kemp, a Republican, issued a strong message of support for police on Thursday.

“We remember those who died in the line of duty and their families, who still mourn their passing,” he said in a video his office posted to social media.

While some have hailed the prosecutor’s office for moving quickly in the Brooks killing, Bryant said he was surprised at the speed, noting that the Georgia Bureau of Investigation hadn’t yet finished looking into it. 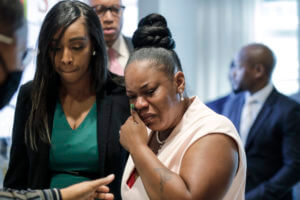 He would not say how many officers called out. But just one officer showed up for work Thursday morning in one zone, which several dozen are assigned to patrol, according to Vince Champion, southeast regional director for the International Brotherhood of Police Officers.

Atlanta officers are walking off their shifts or not responding to calls because they feel “abandoned, betrayed, used in a political game,” Champion told the AP.

Champion said he’s heard from several officers that they fear using force to protect themselves will get them fired or arrested.

Warnock urged people to remember all the lives lost in recent weeks in interactions with police.

“Tragically and involuntarily they all have become visible victims in an urgent public conversation about justice and fairness in our nation,” said Warnock.

Police in Atlanta were called to a Wendy’s last week over complaints of a car blocking the drive-thru lane and found Brooks asleep behind the wheel. A breath test showed he was intoxicated. Officers had a relatively calm conversation with Brooks before things rapidly turned violent when officers tried to handcuff him.

Rolfe shot Brooks after he grabbed a Taser, fired it and ran, Howard, the prosecutor, said. But when the officer fired, Brooks was too far from him for the Taser to be a danger, and it had already been fired twice, so it was empty, Howard said.

Rolfe’s lawyers said he feared for his and others’ safety. Rolfe opened fire after hearing a sound “like a gunshot and saw a flash in front of him,” apparently from the Taser. 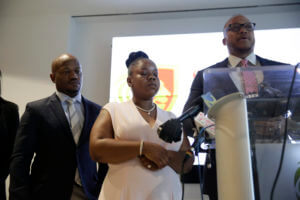 The felony murder charge against Rolfe, 27, carries life in prison or the death penalty if prosecutors decide to seek it. He was also charged with 10 other offenses punishable by decades behind bars.

The district attorney said the other officer, Brosnan, 26, is cooperating with prosecutors and will testify. But his attorneys said he hasn’t agreed to be a witness for prosecutors.

One of his lawyers, Don Samuel, said Thursday that Brosnan suffered a concussion during the struggle with Brooks and put his foot on Brooks only briefly when he heard gunshots because he didn’t know where they were coming from.

“He’s worried that he may have access to a weapon,” Samuel said. 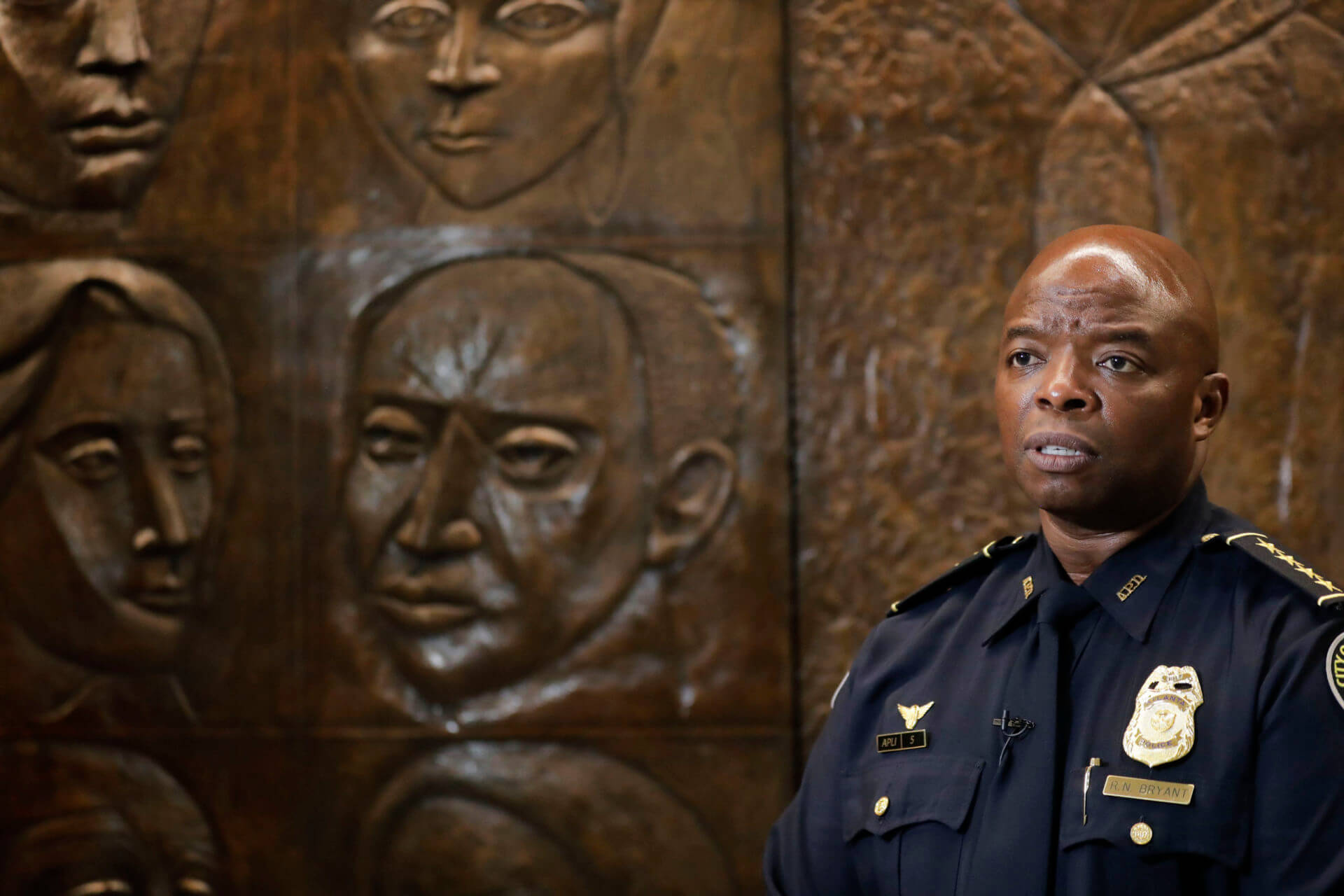