NEW YORK (AP) — Michael Avenatti asked Wednesday to be released temporarily from a federal jail, citing a recent bout with pneumonia, a sick cellmate and filthy jail conditions as reasons he is at high risk of getting the coronavirus. 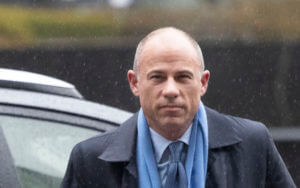 In this Dec. 17, 2019 file photo, attorney Michael Avenatti arrives at federal court in New York to enter a plea to an indictment charging him with trying to extort up to $25 million from Nike. Avenatti, who awaits a June 2020 sentencing after he was convicted of trying to extort $25 million from the sportswear giant, asked Wednesday, March 18, 2020, to be released temporarily from a federal jail. He cited a recent bout with pneumonia, a sick cellmate and filthy jail conditions as reasons he is at high risk of getting the coronavirus. (AP Photo/Mark Lennihan, File)

“From Mr. Avenatti’s perspective, his life — not only his liberty — is on the line,” Steward said, “creating a powerful incentive to abide by any release conditions the Court may impose.”

He said Avenatti, 49, is vulnerable because he had pneumonia six months ago, his cellmate was recently removed with flu-like symptoms including a severe fever and coughing, and because the Metropolitan Correctional Center where he is housed is filthy and cannot protect him.

The lawyer said Avenatti told him Wednesday that a second inmate had been removed from his 26-inmate unit with coronavirus symptoms.

Steward wrote that the facility is especially dangerous because unsanitary conditions occur in a place where pretrial defendants come from across the world and staff enters and leaves without being screened.

He noted that a recent eight-day lockdown at jail was due to a loaded gun brought into the facility by a guard couldn’t be located. During the lockdown, Avenatti was confined to his cell with three rats and left inmates without clean water, forced to drink from a sink that often contained brown water. He added that no hand sanitizer was available and guards did not wear masks or gloves.

Steward wrote to the judge who revoked Avenatti’s bail earlier this year after prosecutors complained that he moved money around illegally while on bail.

Steward said prosecutors have informed him that they oppose Avenatti’s release on bail, even with electronic monitoring and restrictions on his access to money. A spokesman for prosecutors declined comment.

Avenatti awaits a June sentencing after he was convicted of trying to extort $25 million from sportswear giant Nike. He also faces criminal trials in New York next month and Los Angeles in May.