WASHINGTON (AP) — President Joe Biden has nominated a diverse group of six lawyers to run U.S. attorney’s offices across the country, his latest picks for the top law enforcement positions. 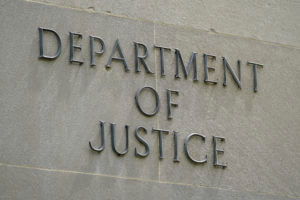 FILE – An exterior sign is photographed outside the Robert F. Kennedy Department of Justice building in Washington on May 4, 2021. President Joe Biden is nominating six lawyers to run U.S. attorney’s offices across the country, a diverse group of candidates in the latest picks for the top law enforcement positions. The nominees, being announced by the White House on Wednesday, Jan. 26, 2022, would run the federal prosecutors’ offices in Connecticut, Utah, Montana, Alaska, New Mexico and New Hampshire. (AP Photo/Patrick Semansky, File)

The Justice Department’s 93 U.S. attorneys, who are responsible for federal criminal prosecutions in their respective districts, are likely to be central to efforts to combat violent crime. Biden has now nominated 43 people to serve as U.S. attorneys, positions that have been filled for months by acting U.S. attorneys.

The candidates were “chosen for their devotion to enforcing the law, their professionalism, their experience and credentials in this field, their dedication to pursuing equal justice for all, and their commitment to the independence of the Department of Justice,” the White House said.

The last Senate-confirmed U.S. attorney in the state, John Durham, currently serves as special counsel overseeing the investigation into the origins of the Russia probe that shadowed Donald Trump’s presidency for years. Durham left his position as U.S. attorney last year — the Justice Department asked prosecutors appointed by Trump to resign from their posts as the Biden administration moved to transition to its own nominees — but has remained as a special counsel after being appointed by then-Attorney General William Barr.

The Democratic president tapped Jesse Laslovich, a health care executive and former state legislator, to be the U.S. attorney in Montana. Since 2017, Laslovich has worked as a regional vice president for SCL Health Montana-Wyoming region. Before that, he was the chief legal counsel for the Montana Commissioner of Securities and Insurance and worked as a state prosecutor and special assistant U.S. attorney. He served in Montana’s state Senate from 2005 to 2010 and in the state House of Representatives from 2001 to 2004.

S. Lane Tucker, an attorney in the Anchorage office of the law firm Stoe Rives LLP, is nominated to be the U.S. attorney in Alaska. The former federal prosecutor worked at the Justice Department in the 1990s and early 2000s.

Alexander M.M. Uballez, a federal prosecutor in the U.S. attorney’s office in New Mexico, is nominated to run that office. Uballez has worked in the office since 2016 and was previously an assistant district attorney in Albuquerque and Santa Fe.