LOS ANGELES (AP) — Video from cameras worn by deputies who responded to a mass shooting at a Southern California bar in 2018 and recordings of calls for help released Tuesday captured the chaos, horror and confusion of the massacre that left a dozen people dead.

Terrified patrons hiding from a gunman still stalking victims reported the shooting in whispers to dispatchers, while others sobbed over the trauma of an event still unfolding. Officers encountered patrons running for their lives and a man bleeding in the parking lot while friends tried to save him. 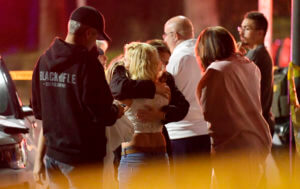 FILE – In this Nov. 8, 2018, file photo, people comfort each other as they stand near the scene of a shooting in Thousand Oaks, Calif., where a gunman opened fire inside a country dance bar crowded with hundreds of people. Video released Tuesday, Jan. 18, 2022, from body cameras worn by deputies who responded to the mass shooting captures the chaos deputies encountered when they arrived at the scene. The video was released after a court fight by The Associated Press and other news outlets to have the video released. (AP Photo/Mark J. Terrill, File)

The footage and audio from the Borderline Bar and Grill shooting was released Tuesday by the Ventura County sheriff’s after a court fight by The Associated Press and other news outlets who sought the evidence under public records laws.

While the evidence was documented in a more than 400-page report on the shooting released in July, it was the first time the video and call recordings were released.

Investigators concluded that Ian David Long, 28, who served as a Marine in Afghanistan, felt college students disdained veterans and targeted the Thousand Oaks country bar because it was student night. Long took his own life as police surrounded the building on Nov. 7, 2018.

As lines rang off the hook at a sheriff’s call dispatch center, a woman reporting the shooting whispered: “We’re hiding. The guy’s probably still here.”

When a dispatcher asked another woman if she saw the shooting, she responded: “It’s still happening!”

Patrons were still running for cover when the first officers arrived.

Videos from the perspective of a dozen officers show how they were largely in the dark about what happened after one of their own, Sgt. Ronald Helus, went into the building after radioing: “We got multiple people down. We need a lot of ambulances.”

Surveillance footage showed Helus and CHP Officer Todd Barrett slowly entering the bar with guns raised and Helus with a flashlight on the barrel of his rifle scanning the darkness. Long, who had been hiding in the office by the entrance, ambushed the men from and began firing from his .45-caliber semiautomatic pistol.

Barrett ran outside and began returning fire. Helus stumbled as he retreated. When he stood up, he was struck by a bullet fired Barrett fired at Long.

Helus managed to roll onto his back and fire several rounds as Long shot him five times while he was down. The medical examiner, however, concluded it was Barrett’s inadvertent shot that killed the veteran officer.

Some of the body cameras captured the sporadic bursts of gunfire that erupted in the entrance of the bar.

Other cameras were either not turned on at the time of the shooting or were on officers who arrived later.

In the silence that followed the shootout, Sgt. Laura Natoli, standing behind bushes near the bar, noted the smoke she could see inside the bar and said to a deputy: “I wonder if he took himself out.”

Shortly after, a man in a plaid shirt and ball cap who had been the bar emerged from the darkness behind a dumpster and startled Natoli.

“Jesus, what are you doing dude?” she said.

The man said he was in the Army and wanted to help. He said at least one, possibly two, officers were down.

Deputy Charles Gallagher, who was with Natoli, cursed.

“We have no other communication from people inside that’s what I’m worried about,” Natoli said.

Meanwhile, behind a patrol vehicle where Deputy Matthew Kahn had taken cover with another officer, a shooting victim was on the ground and sounded as if he was drifting into unconsciousness as his fellow bargoers applied pressure to stop the bleeding.

“Take me to the hospital,” the man said.

A woman reassured him: “They’re on their way.”

Another officer who arrived told them they needed to carry him to a staging area where ambulances were arriving.

“He’s not going to make it sitting here,” the officer said. 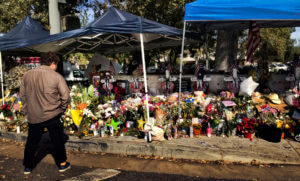 FILE— A passerby stops to look over a street side memorial to the shooting victims of the Borderline Bar in Thousand Oaks, Calif., on Tuesday, Nov. 27, 2018. Video released from body cameras worn by deputies who responded to the mass shooting captures the chaos deputies encountered when they arrived at the scene. The video was released Tuesday, Jan. 18., 2022, after a court fight by the Associated Press and other news outlets to have the it released. (AP Photo/Amanda Lee Myers, File)

The man was carried to safety. He was the only gunshot victim who survived, Cmdr. Jeff Miller said.

At some point, Kahn, who had spoken to Barrett, could be heard saying Helus had been shot. But his call was not retransmitted, according to the report.

“There was a lack of knowledge of Sgt. Helus being shot and down for a pretty substantial time,” Miller said when asked about the footage and radio calls.

Most of the newly released footage ends after Natoli sends Deputy Steve Manley and another officer with assault rifles to the front of the bar to see if they can see any sign of Helus.

Manley’s camera captures the barrel of his rifle as he moves along in the shadows and ducks behind a low wall and bushes in front of the bar.

With his gun trained toward the entrance area, he reported that there was no movement. Then a pop could be heard inside the building.

“I just had one shot,” he said on his radio — a transmission heard on the other videos.

The shot was Long taking his own life, Miller said.

The videos ended there.