Brittney Griner’s wife, Cherelle, has thanked everyone for their support of the WNBA star, who was arrested last month in Russia.

Brittney Griner was detained at a Moscow airport after Russian authorities said a search of her luggage revealed vape cartridges. They were identified as containing oil derived from cannabis, which could carry a maximum penalty of 10 years in prison. 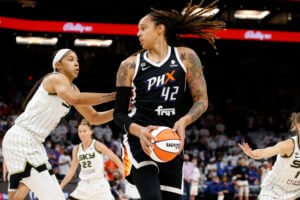 FILE – Phoenix Mercury center Brittney Griner (42) looks to pass as Chicago Sky center Candace Parker defends during the first half of game 1 of the WNBA basketball Finals , Sunday, Oct. 10, 2021, in Phoenix. Griner was arrested in Russia last month at a Moscow airport after a search of her luggage revealed vape cartridges. The Russian Customs Service said Saturday, March 5, 2022, that the cartridges were identified as containing oil derived from cannabis, which could carry a maximum penalty of 10 years in prison. The customs service identified the person arrested as a female player for the U.S. national team and did not specify the date of her arrest. (AP Photo/Ralph Freso, File)

The 31-year-old Griner, one of the most recognizable players in women’s basketball, has won two Olympic gold medals with the U.S., a WNBA championship with the Phoenix Mercury and a national championship at Baylor. She is a seven-time All-Star.

Cherelle Griner posted a picture Sunday on Instagram of the couple.

“Thank you to everyone who has reached out to me regarding my wife’s safe return from Russia. Your prayers and support are greatly appreciated,” she wrote. “I love my wife wholeheartedly, so this message comes during one of the weakest moments of my life. I understand that many of you have grown to love BG over the years and have concerns and want details. Please honor our privacy as we continue to work on getting my wife home safely.

Secretary of State Antony Blinken said Sunday the U.S. will provide assistance to any American citizen being held on foreign soil. 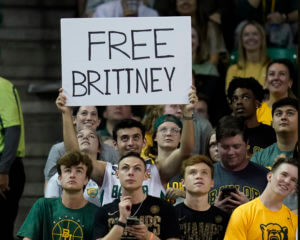 A student holds up a sign during an NCAA college basketball game against Iowa State, Saturday, March 5, 2022, in Waco, Texas. (Chris Jones/Waco Tribune-Herald via AP)

“There’s only so much I can say given the privacy considerations at this point. Whenever an American is detained anywhere in the world, we of course stand ready to provide every possible assistance, and that includes in Russia,” Blinken said. “We have an embassy team that’s working on the cases of other Americans who are detained in Russia. We’re doing everything we can to see to it that their rights are upheld and respected.”

There has been an outpouring of support for Griner on social media from WNBA players as well as other athletes. Many have voiced their concerns for Griner’s physical well-being as well as her mental health. She dealt with mental health issues for much of her life and has been open about it.

There was at least one sign at the Baylor men’s basketball game on Saturday supporting the former Bears star.

Griner has played in Russia for the last seven years in the winter, earning over $1 million per season — more than quadruple her WNBA salary. She last played for her Russian team UMMC Ekaterinburg on Jan. 29 before the league took a two-week break in early February for the FIBA World Cup qualifying tournaments.

More than a dozen WNBA players were playing in Russia and Ukraine this winter, including league MVP Jonquel Jones and Courtney Vandersloot and Allie Quigley of the champion Chicago Sky. The WNBA confirmed Saturday that all players besides Griner had left both countries.

“We remain in constant contact with her family, her representation, the WNBA and NBA. We love and support Brittney and at this time our main concern is her safety, physical and mental health, and her safe return home,” the Mercury said in a statement.