Stephanie Landreneau was arrested earlier this month following an investigation into allegations she was using department and personal equipment to keep tabs on her estranged husband as he was having a relationship with another officer. 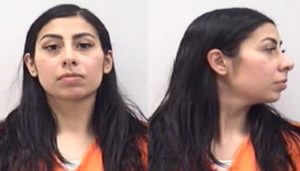 According to the affidavit, Landreneau is married to another officer but he moved out in March of 2022.

Information collected by the investigator officer states she used her husband’s department logins to access the information. The affidavit says Stephanie found out about her husband’s relationship with the other officer through body-worn camera audio and overheard a phone conversation that was “sexual in nature.”

She was also accused of contacting the other female officer repeatedly to ask who she was with.

Under Colorado law, a fifth-degree felony carries a maximum punishment of 1-3 years in prison, with additional penalties for enhanced factors. A class two misdemeanor charge of unauthorized computer access carries a penalty up to 364 days in jail.

This story was originally published May 19, 2022 by KOAA in Colorado Springs, an E.W. Scripps Company.