AURORA, Colo. (KMGH) — An Aurora man accused of shooting and killing his wife and hiding her body in a garbage can was found guilty of murder by an Arapahoe County jury.

Keith Allen Zotto, 46, was found guilty Tuesday of first-degree murder in the death of Amber Zotto, who was 35 when she was killed. The verdict came after a five-day trial in Arapahoe County District Court. 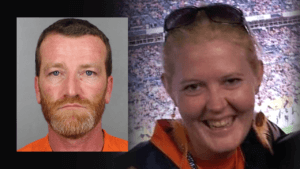 This combination photo provided by KMGH shows Keith Allen Zotto (L) and Amber Zotto (R). A jury convicted Keith of murdering his wife Amber and putting her body in a garbage can in the garage of their home. (KMGH)

The investigation began on July 2, 2019, when a woman called the Aurora Police Department with concerns over her daughter Amber Zotto, according to the affidavit. She said she hadn’t been able to reach her for several days. When she called Keith Zotto, he told her that they had had an argument and she’d left a suicide note before leaving their home on E. Milan Circle in Aurora.

A patrol officer with the Aurora Police Department visited the Zotto home and met with the couple’s two children, ages 12 and 15. Both of them said they hadn’t seen their mother since June 29, 2019.

But prosecutors say when police searched the Zotto home, they found Amber Zotto’s body in a garbage can in the garage. The body was covered in debris and a gun was found in the can.

“He literally threw her away and left her to rot,” Chief Deputy District Attorney Laura Wilson told the court in her closing argument rebuttal. “When you take a gun and point it at someone’s head … you know what happens when you pull that trigger. Amber begged for her life, she put up her hands, but he pulled the trigger.”

Keith Zotto is scheduled to be sentenced July 19. He is facing a mandatory life sentence.

This story was originally published May 12, 2021, by Robert Garrison of KMGH in Denver.