SAULT STE. MARIE, Mich. (WXMI) — Investigators with Homeland Security arrested a registered sex offender from South Carolina Tuesday, after they say he traveled to Michigan to sexually assault a teenage girl he had been communicating with online and over the phone with for years.

Christopher James Masterson, who is currently 35 years old, is now facing charges of attempted sexual exploitation of children, and commission of a felony offense with a minor when required to register as a sex offender. 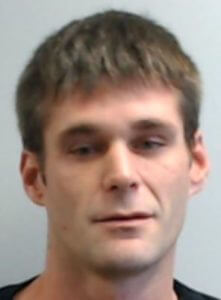 A photo of Masterson on the South Carolina sex offender registry.

He was arrested Tuesday in Sault Ste. Marie by an agent with Homeland Security.

According to documents filed in federal court, officers with the Sault Tribal Police were first called out to a property on Dec. 3, 2018 for what is referred to as a “health and safety complaint.”

The mother of a girl, who was 14 at the time, allegedly told police that the teen had been communicating with an adult man over Snapchat on her cell phone, apparently telling investigators that her daughter had been speaking with the man, known to her as “Chris,” for several months at the time.

A few weeks later, the girl’s mom gave police permission to conduct a forensic evaluation of her daughter’s phone. According to the documents filed in federal court, investigators found communications between the teen and Masterson.

The documents then jump to Oct. 4, 2019 when the girl’s mother met again with officers from the Sault Tribal Police. She apparently told them that Masterson had sent the girl a cell phone through the mail since the last time they spoke about the matter, and was continuing to communicate with her.

Police say they later retrieved the phone and the box used to ship it from South Carolina to Michigan.

According to the court filings, Masterson was previously convicted in Illinois in 2008 for aggravated criminal sexual abuse of a person under 13 years old.

The girl’s mother contacted an agent with Homeland Security on Oct. 19, 2019, saying that Masterson was planning to drive from South Carolina to their home in Michigan to “meet and engage in sexual conduct.”

Investigators claim the girl, who was then 15 years old, told them regarding Masterson, “I know I’m addicted to him.”

The agent with Homeland Security, along with officers from the Sault Tribal Police, then allegedly found Masterson in his truck near the teenager’s family home.

Around this time, the teenage girl was interviewed by a “victim assistance specialist” with Homeland Security about her relationship with Masterson.

Investigators claim she told them that she had sent Masterson nude photos of herself when she was just 13. She allegedly told them that they eventually switched to phone calls and video calls.

She alleged that Masterson had instructed her and her younger sister to engage in sexually explicit acts for him to watch while they were on video calls together. Her younger sister was only around 9 years old at the time of the alleged incident.

Investigators say they reviewed the contents of a Facebook account reportedly used by the teen to communicate with Masterson on June 19, 2020. They allege the teen sent him a message at some point saying, “i wish we never f—g dated in the first place i was 13 and you were too f—g old for me anyways,” and, “we dates for 2 through 3 whole f—g years” [sic].

The next day, on June 20, an agent with Homeland Security allegedly used that Facebook account to pose as the teenage girl and speak with Masterson. The agent claims Masterson attempted to persuade who he thought was the teenager to again engage in explicit acts with her sister.

Fast forward to April 25, 2021, and that agent is in Sault Ste. Marie investigating the case, when he allegedly encounters Masterson and the teenage girl walking together. The girl’s mother showed up and brought the girl home.

The agent then went to re-interview the teenager, who allegedly told them that Masterson had arrived in the area in January or February of 2021, living in his truck.

Deputies with the Chippewa County Sheriff’s Office later went to the location of Masterson’s truck on April 28 and allegedly saw an open box of pregnancy tests on the floor of the vehicle.

Investigators say they then went to re-interview the teenager on May 3, 2021 where she told them that Masterson had sexually assaulted her twice since he arrived in the area, and that he purchased the pregnancy tests to find out if she got pregnant.

An agent with Homeland Security arrested Masterson on May 6, 2021 for allegedly failing to register as a sex offender in Chippewa County, Michigan.

Investigators allege in the court filings that after his arrest, Masterson admitted to them that he had sex with the teenager twice since arriving in Michigan.

He was supposed to be sentenced on a charge for failing to register as a sex offender in Michigan on May 10, 2022, but was arrested by Homeland Security investigators on May 17, 2022.

Masterson will be back in federal court on these charges Wednesday, May 18.

This story was originally published May 17, 2022 by WXMI in Grand Rapids, Michigan, an E.W. Scripps Company.