BALTIMORE (WMAR) — Filming of the Apple TV+ series “Lady in the Lake,” which stars Natalie Portman and has been going on for months around Baltimore, was forced to postpone after producers were threatened with extortion.

“On August 26, 2022, at approximately 4p.m., on the scene of a movie shoot in the 200 block of Park Avenue, the locals threatened the producers of the movie that if they didn’t cease production, they would come back later this evening and shoot someone.

The locals then told the producers that if they paid them, they would allow the production to continue. I don’t know what dollar amount was proposed.

The leaders of the production decided to err on the side of caution and reschedule the shoot after they found another location.” 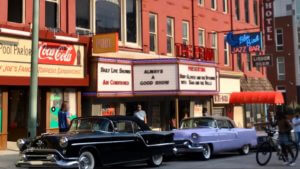 On Monday, state Del. Kathy Szeliga, who represents parts of Harford and Baltimore counties, said in a tweet:

“Crime update from W Bmore. Threatened at gun point and demanding $50k to continue filming or they will shoot the place up!Mafia style extortion threats made to filmmakers as they attempt to make a new TV series in the City.”

Photos posted to Facebook showed Park Avenue transformed into an old-fashioned street for the film shoot.

“Lady in the Lake,” which features Natalie Portman and Baltimore native Moses Ingram, has been filming around town since the spring. Production had mostly been happening in the Hamilton area, but recently was seen at Hollins Market downtown.

This story was originally published Aug. 28, 2022 by WMAR in Baltimore, an E.W. Scripps Company.