PALM BEACH COUNTY, Fla. (WPTV) — A knife-wielding suspect who was shot in the head by a deputy during an alleged hostage situation is out of the hospital and now at the Palm Beach County Jail.

Deputies arrived at the jail with the suspect, Tzvi Allswang, 20, after he was discharged Wednesday from a local hospital. 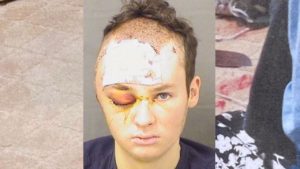 Tzvi Allswang was booked into the Palm Beach County Jail on July 6, 2022, and faces multiple charges after he was shot by a deputy at a home near Boca Raton. (Palm Beach County Sheriff’s Office via WPTV)

From a distance, WPTV was able to watch as Allswang was rolled into the booking area while seated in a wheelchair.

The sheriff’s office said a deputy shot Allswang in the head early Saturday morning at a home along Larkspur Trail near Boca Raton during a hostage situation.

The details of the alleged crime haven’t been released but are reportedly gruesome.

A friend of the victim said that loved ones became concerned when the victim didn’t return home Friday night from the home where she reportedly went for her job.

The sheriff’s office said deputies responded to the home several times and finally forced their way in after hearing a woman scream.

Allswang is expected to face a judge Thursday morning.

The sheriff’s office identified the deputy who shot Allswang as Sgt. William Nogueras — a 14-year employee of the agency.

This story was originally published July 6 by WPTV in West Palm Beach, an E.W. Scripps Company.