TOLEDO, Ohio (AP) — A man who vowed support for a terrorist group and planned an attack on an Ohio synagogue was sentenced to 20 years in federal prison on Monday, federal prosecutors said.

Damon Joseph, 23, of Holland, Ohio, pleaded guilty in May to attempting to provide material support for the Islamic State terrorist group and attempting to commit a hate crime, the Department of Justice said.
A message seeking comment was left Monday with Joseph’s attorney. 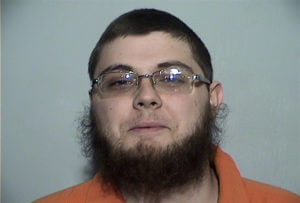 Joseph, also known as Abdullah Ali Yusuf, spent months posting photos of weapons, praising the Islamic State group and talking about carrying out a violent attack on the synagogue, according to federal prosecutors. Those posts drew the attention of the FBI, which assigned undercover agents to communicate with Joseph.

The planned synagogue shooting was inspired by a gunman who killed 11 people at a Pittsburgh synagogue in October 2018. Authorities said Joseph planned to attack on the Jewish sabbath so more people would be present during the assault.

Joseph was arrested on Dec. 7, 2018, after taking possession of two military-style assault rifles from an undercover FBI agent.