CINCINNATI (WCPO) — The Drug Enforcement Agency is worried about the increase in so-called Rainbow Fentanyl seen around the country. 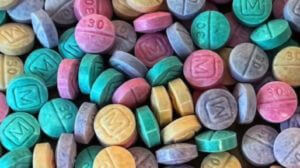 “They’re not the kind of people you think about with an addiction or lifelong addiction issue,” Greene said. “These are college age kids, young people in college who are looking to get an Adderall to study harder, to be more productive in school and are inadvertently overdosing.”

“The only reason parents even know their kids even tried the drug is because they’re finding them dead in their bedrooms,” Babcock said. “They can get right on Snapchat now and order drugs like pizza. It’s not normal.”

Krieger wants people to know the biggest risk to their child is every time they walk out that door to meet their friends, and the chance they are influenced to try a pill or a drug.

“Even if it’s the first time in their life, they’re at risk to die,” Krieger said. “We have to get that across.”

“They were first deceived then poisoned,” Krieger said. “My daughter was given a pill which was very deliberately made to mimic a trademarked pharmaceutical product that we call percocet.”

It is a trend with people duped in illicit drug sales that triggered renewed warnings from the DEA.

“Your kid could be on social media in their bedroom where you think they’re safe ordering an illicit pill that’s ultimately going to lead to an overdose and to them being killed,” Greene said.

Traffickers for Mexican drug cartels market online and social media. Agents see Rainbow Fentanyl, multi-colored pills, in seizures across the country and in the Tri-State. Some think the different colors indicate different qualities of drugs, Greene said. However, DEA lab tests found this untrue. Without citing a specific case, Greene said the DEA has a theory.

“We view this as the traffickers way of reaching a new demographic, which is targeting young adults and children,” he said.

“The fact that overdoses have increased the past two years just says to me there’s a real problem on the street,” Katie Renfrow said.

Renfrow’s son, Sam, died from a fentanyl/heroin overdose in 2017.

Babcock is calling for a COVID-like response to fentanyl poisoning.

This story was originally published Sept. 14, 2022 by WCPO in Cincinnati, an E.W. Scripps Company.