NASHVILLE, Tenn. (AP) — The mother of a Black man fatally shot by a white former Nashville officer sobbed, screamed and knocked over a lectern Friday as she begged a judge not to accept a plea deal she says was struck in secret without her knowledge.

Former officer Andrew Delke pleaded guilty to manslaughter over the death of Daniel Hambrick, 25, in 2018 as part of an agreement with prosecutors. The agreement was accepted by Judge Monte Watkins over objections from Hambrick’s family.

Delke will serve a three-year prison sentence. As part of the agreement, he won’t pursue parole and appeal the case.

At one point, the hearing turned volatile as Hambrick’s mother, Vickie, gave a lengthy statement as family members and others applauded and banged on the door in support.

“I hate you,” Vickie Hambrick screamed over and over again, while also yelling out profanities.

In a particularly chaotic moment, the mother knocked over the lectern and a computer monitor and family members rushed to her side. Delke and Judge Watkins were briefly ushered out of the courtroom.

Delke was about to face trial for a first-degree murder charge, but on Thursday, his attorney announced he had agreed to plead guilty to voluntary manslaughter.

“I hope this case can contribute positively about the much needed discussion about how police officers are trained and how we as a community want police officers to interact with citizens. I am deeply sorry for the harm my actions caused,” Delke said shortly after entering his plea.

A group of roughly two dozen protesters gathered outside the courthouse, chanting “no racist police” to show their opposition to Delke’s plea deal. Others wore shirts noting that police officers and white people receive lighter penalties for committing the same crimes as Black and brown people.

Hambrick’s family said they were not contacted or consulted and did not know about the plea deal until after it was done.

Delke, 27, submitted his resignation Thursday, Metro Nashville Police Department spokesperson Don Aaron said. Delke had been decommissioned, which means he had to turn over his gun but was able to work a desk job and still get paid. 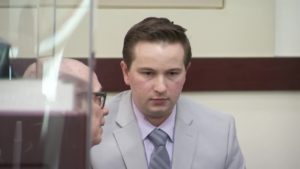 After COVID-19 delays and pretrial back-and-forth, jury selection was slated to start next week in the case. The trial was going to center on a handgun Hambrick was holding that Delke claims was pointed at him for a moment, which prosecutors dispute and video footage does not show.

Prosecutors focused on surveillance footage that captured the shooting, in which Delke stops chasing and shoots the fleeing man. Defense attorneys have contended there was a 36-foot (11-meter) blindspot and plenty could have happened there. There were dozens of cameras, and defense attorneys contended that it was possible that more footage was caught of that blindspot, but wasn’t reviewed by investigators before it was automatically overwritten on the system.

The month after the shooting, Funk released surveillance footage of the shooting publicly, sparking wider attention and outcry. Delke was charged in September 2018, and the shooting caused enough backlash that voters that November installed a community oversight board for Nashville’s police department.

Convicting an officer for an on-duty death remains a tall order. Since 2005, there have been 143 nonfederal sworn law enforcement officers with arrest powers arrested for murder or manslaughter resulting from an on-duty shooting throughout the U.S., with only 45 convicted of a crime resulting from the on-duty shooting, according to a tally from Bowling Green State University criminal justice professor Philip Stinson.

Delke’s attorneys argued the officer followed his training and Tennessee law in response to “an armed suspect who ignored repeated orders to drop his gun.” Funk argued Delke had other alternatives, adding that the officer could have stopped, sought cover and called for help.

On the day of the shooting, Delke was in his patrol car as part of a juvenile-focused unit looking for stolen cars and known juvenile offenders. He followed a car despite learning it was not stolen and never saw the driver or determined how many people were inside, according to an arrest affidavit. The car didn’t pull over as it headed onto the interstate and Delke put on the sirens. He followed from a distance and lost track of the car for some time.

Delke later pulled into a public housing complex and Hambrick was standing outside the car and began running. Delke chased Hambrick and yelled at him to stop, though the officer didn’t know Hambrick’s identity or if he was connected to the car he had been pursuing, the affidavit says.

Hambrick wouldn’t drop a gun despite Delke’s instructions, the affidavit says. Delke “stopped, assumed a firing position, and aimed his service weapon,” firing four times, it says. One shot hit Hambrick’s back, another his torso and a third the back of his head. The fourth shot missed.

Nashville’s Metro Council has approved a $2.25 million settlement to resolve a lawsuit by Hambrick’s family.