DOVER, Del. (AP) — More than two years after the Boy Scouts of America sought bankruptcy protection to stave off a flood of lawsuits alleging child sexual abuse by Scout leaders and volunteers, a Delaware judge is weighing whether to confirm the BSA’s reorganization plan.

After a three-week evidentiary hearing and nearly a week of closing arguments, the judge is expected to rule within the next few weeks. The issues facing Judge Laurie Selber Silverstein are controversial and complex. No matter how she rules, the case will head next to a federal district court, with appeals likely to follow. Here is a brief look at bankruptcy case. 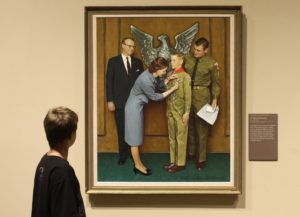 FILE – This July 22, 2013, file photo shows one of the twenty-three original, Boy Scout-themed Norman Rockwell paintings during an exhibition at the Church History Museum in Salt Lake City, Utah. The Boy Scouts of America has filed for bankruptcy protection as it faces a barrage of new sex-abuse lawsuits. The filing Tuesday, Feb. 18, 2020, in Wilmington, Del., is an attempt to work out a potentially mammoth compensation plan for abuse victims that will allow the 110-year-old organization to carry on. (AP Photo/Rick Bowmer, File)

The reorganization plan calls for the BSA and its 250 local councils, along with settling insurance companies and troop sponsoring organizations, to contribute some $2.6 billion in cash and property to a fund for abuse victims.

In return for those contributions, those entities would be released from further liability, meaning they could not be sued for Scout-related abuse claims. But the plan allows abuse claimants to sue insurance companies and local troop sponsoring organizations that do not enter into their own settlements within one year.

The settlement trust would be overseen by Barbara Houser, a retired Texas bankruptcy judge who served as lead mediator in Puerto Rico’s bankruptcy. She would be assisted by retired federal judges Diane Welch and Michael Reagan, who would serve as claims administrators.

Houser would be required to consult with a 7-member advisory committee consisting of attorneys representing abuse claimants.

When it filed for bankruptcy, the BSA was facing about 275 filed lawsuits, and was aware of roughly another 1,400 pending claims, but more than 82,200 abuse claims are before the bankruptcy court. 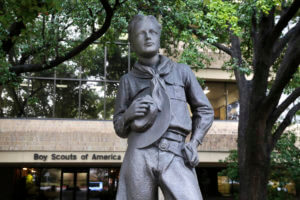 In this Wednesday, Feb. 12, 2020, photo, a statue stands outside the Boys Scouts of America headquarters in Irving, Texas. The Boy Scouts of America has filed for bankruptcy protection as it faces a barrage of new sex-abuse lawsuits. The filing Tuesday, Feb. 18, in Wilmington, Delaware, is an attempt to work out a potentially mammoth compensation plan for abuse victims that will allow the 110-year-old organization to carry on. (AP Photo/LM Otero)

Attorneys for BSA insurers, including those that have since reached settlements and now support the plan, have said the sheer volume of claims is an indication of fraud and the result of aggressive client solicitation by attorneys and for-profit claims aggregators.

The Boy Scouts of America is contributing less than 10% of the proposed settlement fund, offering property valued at about $80 million, an $80 million promissory note, and roughly $20 million cash.

The 250 local BSA councils, which run day-to-day operations for troops, would contribute at least $515 million in cash and property, and an interest-bearing note of at least $100 million.

The BSA’s two largest insurers, Century Indemnity and The Hartford, would contribute $800 million and $787 million, respectively. Other insurers have agreed to contribute about $69 million. The BSA’s former largest troop sponsor, the Church of Jesus Christ of Latter-day Saints, would contribute $250 million for abuse claims involving the Mormon church. Congregations affiliated with the United Methodist Church would contribute $30 million.

A key issue in the bankruptcy has been the treatment of local troop sponsoring organizations, known as “chartered organizations,” and their rights under BSA insurance policies. Those organizations, numbering in the tens of thousands, include religious entities, civic associations and community groups.

Under the plan, virtually every Roman Catholic entity nationwide, including parishes, schools and dioceses, would be released from liability for all Scouting-related abuse claims from 1976 to the present. They also would be protected from all pre-1976 claims covered by the BSA’s settling insurers and would be granted 12 months to negotiate financial contributions to the settlement fund in exchange for a full release.

In exchange, Catholic entities would release their insurance rights and agree to work with the Boy Scouts through at least 2036 to improve and support Scouting and increase enrollment. A similar support provision was included in the United Methodist settlement. Those provisions could prove critical for the Boy Scouts after decades of steady membership declines.

While some BSA insurers have negotiated settlements for a fraction of the billions of dollars in liability exposure they potentially faced, other insurance companies continue to challenge the plan. They contend the fund distribution procedures violate their rights and would result in grossly inflated payments of abuse claims, including tens of thousands otherwise barred by the passage of time. Opposing insurers also say the findings plan supporters want the judge to make would bind them and make it difficult to challenge claim decisions. In an email, one attorney for abuse claimants described such binding trust distribution procedures as a “Holy Grail” that mass tort lawyers have been chasing for years. Insurers say approval by the judge would set a dangerous precedent tort lawyers would use to their advantage in future lawsuits.

Perhaps the most contentious issue in the bankruptcy, and the one most fraught with legal difficulty, is whether third parties, including insurers, local BSA councils and troop sponsors, should be allowed to escape future liability by contributing to the victims fund, or at least not objecting to the plan.

Some survivors argue that releasing their claims against non-debtor third parties without their consent violates their due process rights.

The U.S. bankruptcy trustee, the government’s “watchdog” in Chapter 11 bankruptcies, argues that such releases are not allowed under the bankruptcy code.

Such third-party releases, spawned by asbestos and product-liability cases, have been criticized as an unconstitutional form of “bankruptcy grifting,” where non-debtor entities obtain benefits by joining with a debtor to resolve mass-tort litigation in bankruptcy.

In December, a New York judge rejected a proposed settlement in the Purdue Pharma bankruptcy because members of the Sackler family, which owns the maker of OxyContin, would be protected from civil liability in exchange for paying billions of dollars. A federal appeals court will hear arguments on that ruling next week.

Unlike the Purdue case, however, the BSA plan provides broad, nonconsensual releases to thousands of entities, many of which have not contributed to the settlement trust, or even been identified.

“Thousands of unknown persons will receive participation trophies without even having to participate,” said David Buchbinder, an attorney for the U.S. trustee.