In the latest twist in the Twitter-Elon Musk saga, the company has sued the billionaire Tesla CEO in an attempt to force him to complete his $44 billion takeover.

Twitter claims in a lawsuit filed Tuesday in Delaware that Musk’s “outlandish” and “bad faith” actions have caused the social media platform irreparable harm and sunk its stock price. 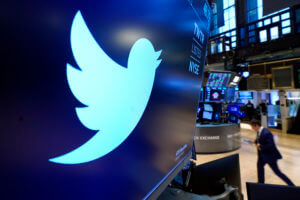 FILE – The logo for Twitter appears above a trading post on the floor of the New York Stock Exchange, Nov. 29, 2021. Twitter claims in a lawsuit filed Tuesday, July 12, 2022, in Delaware, that Musk’s “outlandish” and “bad faith” actions have caused the social media platform irreparable harm and sank its stock price. (AP Photo/Richard Drew, File)

Legal experts say Twitter Inc. has a strong case, but the coming court battle could be long and contentious and the outcome uncertain. So what’s next for Twitter and Musk in the battle over the social media company’s future?

In short, Twitter wants to complete the deal both sides had agreed to, and says Musk’s reasons for backing out are just a cover for his cold feet after the takeover no longer makes financial sense for him.

In April, Musk pledged to pay $54.20 a share for Twitter, which agreed to those terms after reversing its initial opposition to the deal. But the two sides have been bracing for a legal fight since the billionaire said Friday that he was backing away from his agreement to buy the company, saying Twitter did not give him enough information about how many spam accounts are on the service, among other reasons.

Twitter’s lawsuit asserts that “Musk refuses to honor his obligations to Twitter and its stockholders because the deal he signed no longer serves his personal interests.”

“Having mounted a public spectacle to put Twitter in play, and having proposed and then signed a seller-friendly merger agreement, Musk apparently believes that he — unlike every other party subject to Delaware contract law — is free to change his mind, trash the company, disrupt its operations, destroy stockholder value, and walk away,” the suit states.

Musk agreed to pay 38% above Twitter’s stock price at the time that he offered the “take it or leave it” deal, the lawsuit says. But soon after, the stock market stumbled and shares of Tesla, where most of Musk’s personal wealth comes from, lost more than $100 billion of their value.

Not formally, although he has tweeted. After Twitter filed the lawsuit, Musk, who has more than 100 million followers, tweeted “Oh the irony lol” without explanation. Earlier in the week, he had taunted Twitter over the anticipated lawsuit, suggesting that the trial court discovery process — when both sides have to hand over evidence — would finally reveal the internal spam bot data he’s been demanding.

Barring the unlikely event of the two sides settling, the case is headed to trial and a judge could start making decisions this summer. Twitter has told employees it asked for an “expedited trial” to be heard in September because it is “critically important” to get it resolved quickly.

“Delaware prides itself on being very fast in responding to urgent issues where there is a lot of public or shareholder attention,” said Lawrence Cunningham, a law professor and corporate governance expert at George Washington University.

But it could still end up dragging for weeks or longer, especially if either side tries to stretch it out. “Twitter would probably want to get things done fast. Elon, I don’t know,” Cunningham said.

Twitter filed its lawsuit in the Delaware Court of Chancery, which frequently handles business disputes among the many corporations, including Twitter and Tesla, that are incorporated there. The court describes itself as the “nation’s preeminent forum for the determination of disputes involving the internal affairs of the thousands upon thousands of Delaware corporations and other business entities.” The Twitter-Musk case, in that sense, is unusual because it involves a business suing an individual.

WHAT ARE THEY ARGUING ABOUT?

The spam bot question will likely be a central theme, since that is the main pretext through which Musk wants to back out of the deal and “might be a richer argument than people think,” said Donna Hitscherich, a Columbia University business professor.

Twitter claims in its lawsuit that Musk started out saying he wants to buy Twitter to rid it of “crypto spam” he viewed as a “major blight on the user experience” — and take it private because “purging spam would otherwise be commercially impractical.”

But when the stock market went south, Twitter claims, “Musk shifted his narrative, suddenly demanding ‘verification’ that spam was not a serious problem on Twitter’s platform, and claiming a burning need to conduct ‘diligence’ he had expressly forsworn.”

Does the spam issue present a “material breach” of Twitter’s obligation in the deal, as Musk claims, because the company didn’t give him sufficient data to determine how many of the platform’s 229 million accounts are fake? Or is Musk breaching his obligation to follow through with the contract he signed? That’s what the court will determine.

That is certainly a possible outcome, though some experts say the court may not go that far. That said, the general sentiment favors Twitter in the suit.

In a case with potential relevance to Musk’s legal fight, the chancery court last year forced private equity firm Kohlberg & Co. to go through with its $550 million buyout of DecoPac, a company based in Minnesota that calls itself the world’s largest supplier of cake decorating supplies to professional decorators and bakeries. The case was emblematic of the court’s common — though not uniform — resolution of enforcing contractual obligations on buyers.

Other options include Musk being forced to pay the $1 billion breakup fee each side agreed to if deemed responsible for the deal falling through. Or he might have to pay off a larger amount without actually buying the company for $44 billion.

“If he’s walked away from the deal, there’ll be damages and it’s not necessarily limited to the breakup fee,” Hitscherich said.

Delaware courts have been “very picky” about interpreting what counts as a valid reason for backing off of a deal, Cunningham said. The gap between what Musk knew about Twitter in April and the state of the company today “has to be revolutionary,” and there’s little evidence of that, he said.