GRAND RAPIDS, Mich. (AP) — Peter Lyoya took his six children from Congo in 2014 to escape violence. Now he fears he brought them to the U.S. to die.

A Michigan police officer fatally shot his eldest son, 26-year-old Patrick, in the head this month following a traffic stop in Grand Rapids. Video released Wednesday shows a brief foot chase and struggle over the white officer’s Taser before he shoots Patrick Lyoya in the head as the Black man is face down on the ground. 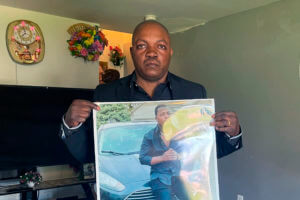 Peter Lyoya holds up a picture of his son Patrick Lyoya, 26, in his home in Lansing, Mich., April 14, 2022. Patrick was face-down on the ground when he was fatally shot in the head by a Grand Rapids Police officer after resisting arrest on April 4, 2022. Grand Rapids police released four videos from different sources Wednesday, nine days after Patrick Lyoya was killed during a traffic stop. Prominent civil rights attorney Ben Crump and Lyoya’s family are planning to hold a news conference Thursday afternoon. (AP Photo/Anna Nichols)

Peter Lyoya said Thursday that he came to the U.S. to get away from prolonged civil unrest in which several rebel groups have vied for control of territories in mineral-rich eastern Congo. Patrick, who had two young children of his own, lived in Grand Rapids and visited Lansing on weekends and would spend money on his siblings, his father said.

“Patrick never had a problem with anybody,” his dad told The Associated Press through an interpreter during an interview at his Lansing apartment. He and his wife later spoke at an emotional news conference in Grand Rapids, a city of about 200,000 people that’s about 150 miles (240 kilometers) northwest of Detroit.

In the April 4 encounter, the officer repeatedly ordered Patrick Lyoya to let go of the Taser.

Grand Rapids Police Chief Eric Winstrom cited a need for transparency when releasing video collected from a passenger in the car Lyoya was driving, the officer’s body camera, the officer’s patrol car and a doorbell camera. Winstrom did not identify the officer, a seven-year veteran who is on paid leave while state police investigate the shooting.

Lawyers for the Lyoya family said the officer should be prosecuted and fired.

“The video shows us that this is as his mother and father have said — an execution. And there is no way to try to spin it or justify,” prominent civil rights attorney Ben Crump said as Patrick’s parents cried. “It is an unjustifiable use of deadly force because the police escalated a traffic stop into an execution.” 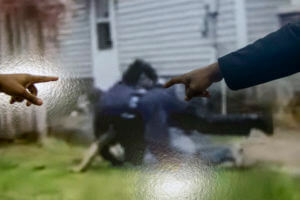 Civil rights attorney Ben Crump, right, and interpreter Israel Siku point to video evidence during in a press conference at the Renaissance Church of God in Christ Family Life Center in Grand Rapids, Mich. on Thursday, April 14, 2022. Crump is representing the family of Patrick Lyoya, who was shot and killed by a Grand Rapids Police Department officer on April 4. (Cory Morse/The Grand Rapids Press via AP)

The Lyoyas also asked for police to release the officer’s name. Patrick’s brothers and sisters want to know who killed him and would like to see his picture so they can know “this is the person that took our beloved one,” Peter Lyoya said.

Prosecutor Chris Becker, who will decide whether any charges are warranted, said the public should not expect a quick decision.

Video shows Patrick Lyoya running from the officer who stopped him for driving with a license plate that did not belong to the vehicle. They struggled in front of several homes.

Winstrom said the fight over the Taser lasted about 90 seconds. In the final moments, the officer was on top of Lyoya, kneeling on his back at times.

“From my view of the video, Taser was deployed twice. Taser did not make contact,” Winstrom, a former high-ranking Chicago police commander who became Grand Rapids chief in March, told reporters. “And Mr. Lyoya was shot in the head. However, that’s the only information that I have.”

The traffic stop was tense from the start. Video shows Lyoya getting out of the car before the officer approached. He ordered Lyoya to get back in the vehicle, but the man declined.

The officer demanded his driver’s license and asked him if he spoke English. Lyoya responded “yes” and said the license was in the vehicle. 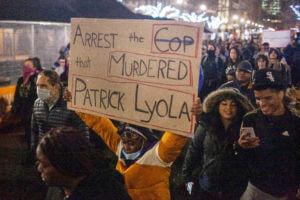 Protesters march through downtown Grand Rapids, Mich., near the police department during a demonstration held after videos of the shooting of Patrick Lyoya, by a Grand Rapids police officer from April 4, were released to the public on Wednesday, April 13, 2020. (Daniel Shular/The Grand Rapids Press via AP)

The foot chase began after Lyoya closed the car door and started walking. The officer told Lyoya to “stop” and tried to pull his hands behind his back.

Lyoya’s mother, Dorcas, told reporters that she thought the family was in a safe place after leaving Congo and was “astonished to see that my son has been killed with (a) bullet.”

“That was my beloved son. You know how you love your firstborn son,” she said through an interpreter.

Crump said the officer could have waited for backup once Lyoya ran but instead got “violent.” He accused him of not following proper training by using the Taser while close to Lyoya, saying it was Lyoya’s “natural instinct” to try to stop from being stunned.

Because the Taser was fired twice, it was ineffective without being reloaded, Crump said.

“There was no reason for him to have any intimate fear of the Taser being used against him,” he said of the officer.

However, a Taser can still deliver a shock after the two cartridges are spent if a person holds it against someone and fires. What is known as a “drive stun” does not incapacitate the person but does hurt, according to Andrew J. Scott III, an expert in police practices and procedures and a former police chief in Boca Raton, Florida.

A Taser can also be used that when the cartridges are still in the weapon. Officers sometimes do that in the hope that they will not have to deploy the Taser’s probes.

As in many U.S. cities, Grand Rapids police have been occasionally criticized over the use of force, particularly against Black people, who make up 18% of the population. Several hundred protesters gathered outside the Grand Rapids Police Department following Wednesday’s release of the videos. The demonstration remained nonviolent.

A downtown street has been designated Breonna Taylor Way, named for the Black woman and Grand Rapids native who was killed by police in Louisville, Kentucky, during a botched drug raid in 2020.

Her mother, Tamika Palmer, attended the news conference with the Lyoya family, their legal team and community leaders. 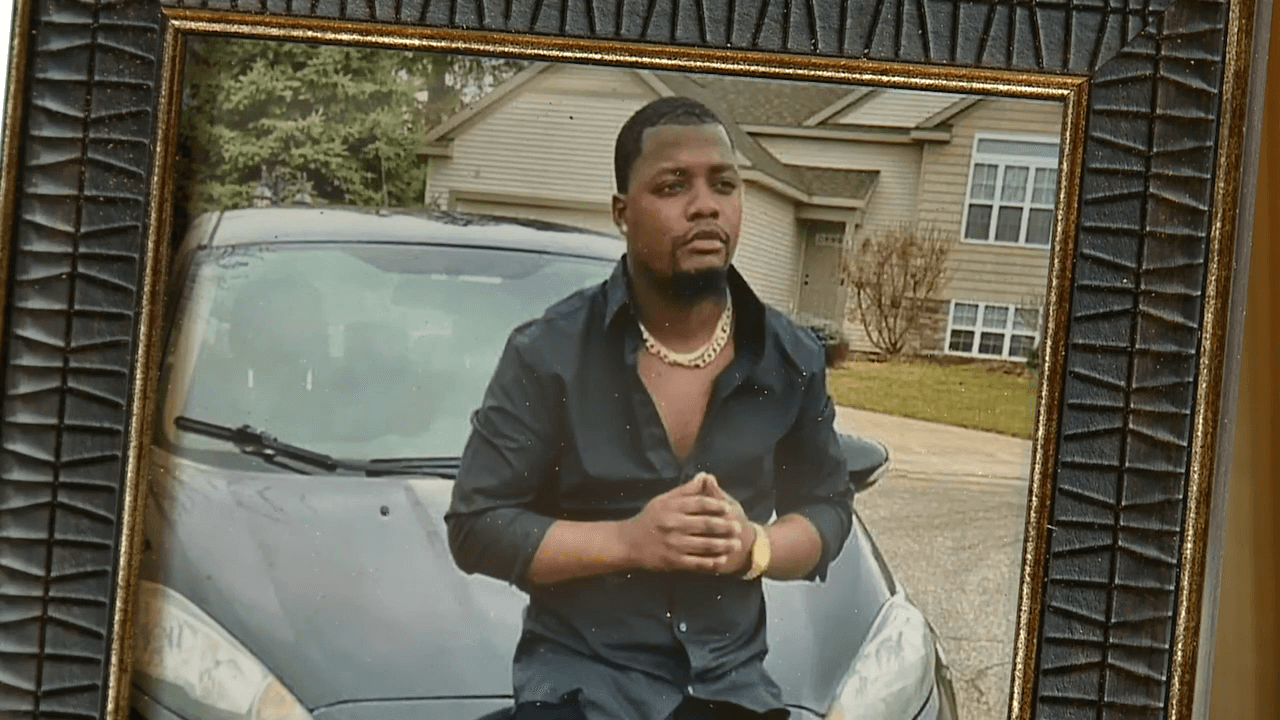 An undated photo of Patrick Lyoya who was shot to death April 4, 2022 by a Grand Rapids police officer. (WXMI)
MORE NEWS