PLACERVILLE, Calif. (AP) — A father and son charged with starting a massive California wildfire that destroyed many homes and forced tens of thousands of people to flee Lake Tahoe communities earlier this year pleaded not guilty in court Friday.

The El Dorado County prosecutor’s office charged David Scott Smith, 66, and Travis Shane Smith, 32, with reckless arson. The office also charged the son with illegal conversion or manufacture of a machine gun and both men of illegal possession of a firearm silencer. 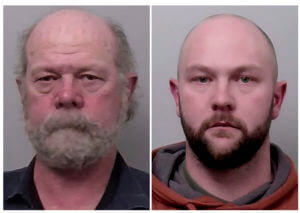 These images provided by the El Dorado County Sheriff’s Office shows David Smith, left, and his son Travis Shane Smith, who were arrested Wednesday, Dec. 8, 2021, on suspicion of starting a massive California wildfire that destroyed many homes and forced tens of thousands of people to flee Lake Tahoe communities earlier this year, authorities said. The two are accused of reckless arson in a warrant issued before formal charges are filed, the El Dorado County District Attorney’s office said. (El Dorado County Sheriff’s Office via AP)

The defendants pleaded not guilty to all charges, said Emily Idleman, assistant to the chief of investigations in the district attorney’s office.

The men were arrested Wednesday and remain in El Dorado County Jail in lieu of $1 million bail each. A bail reduction hearing is scheduled for Monday.

The criminal complaints do not specify how the machine gun and silencer tie into the Caldor Fire and the DA’s office has not offered an explanation. The fire started Aug. 14 and crossed three Northern California counties, forcing tens of thousands of people to evacuate the resort town of South Lake Tahoe before it was contained in October.

Five people were injured and about 1,000 homes and other buildings were destroyed.

The complaints said both men illegally possessed a firearm silencer between Aug. 11 and Sept. 23 and that Travis Smith converted or manufactured a machine gun between Aug. 9 and Aug. 14.

Mark Reichel, the attorney for both men, said previously that the two were near where the fire started and called 911 to report flames. 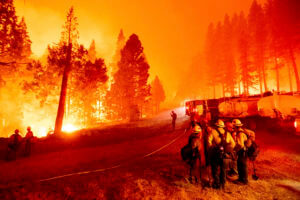 FILE – In this Thursday, Aug. 26, 2021 file photo, the Caldor Fire burns along both sides of Highway 50 as firefighters work to stop its eastward spread in Eldorado National Forest, Calif. David Scott Smith and his son, Travis Shane Smith, appeared in El Dorado County Superior Court, Friday, Dec 10, 2021, where they pleaded not guilty to charges of starting the massive wildfire earlier this year. Travis Shane Smith also pleaded not guilty to a charge of illegal conversion or manufacture of a machine gun and both men pleaded not guilty to a charge of being in possession of a silencer. (AP Photo/Noah Berger, File)

“Neither one has ever been in trouble with the law in their life. They’re very law-abiding people,” he said.

The Caldor Fire scorched more than 346 square miles (900 square kilometers) from east of Sacramento to the Nevada border, threatening ski resorts and other prominent recreational areas.

The district attorney’s office said the case was developed with the U.S. Forest Service, California’s firefighting agency and the California Department of Justice, with help from the Sacramento County District Attorney’s crime lab.