WASHINGTON (AP) — The FBI sounded the alarm Monday about an explosive increase in teenage boys being targeted online and extorted for money after being tricked into sending sexually explicit pictures. 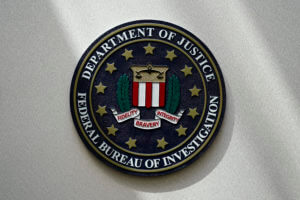 FILE – An FBI seal is seen on a wall on Aug. 10, 2022, in Omaha, Neb. The FBI sounded the alarm Monday, Dec. 19, about an explosive increase in teenage boys being targeted online and extorted for money after being tricked into sending sexually explicit pictures. (AP Photo/Charlie Neibergall, File)

At least 3,000 children, mostly teenage boys, have been victims of the schemes that are connected to more than a dozen suicides this year, a scale that U.S. authorities have not seen before, Justice Department officials said. Many think they are chatting online with kids around their own age but are quickly manipulated into sending explicit pictures and then blackmailed for money with threats to release the images, the FBI said.

Most victims are between 14 and 17, but kids as young as 10 have been targeted.

The FBI said it was issuing the national public safety alert now since kids may be spending more time online as schools close for winter break.

There’s been a staggering tenfold increase in reports since last year, and there are likely more victims who never came forward, FBI officials said. Embarrassment and shame can prevent them from asking for help.

“Victims may feel like there is no way out—it is up to all of us to reassure them that they are not in trouble, there is hope, and they are not alone,” said FBI Director Christopher Wray in a statement.

Many of the current wave of schemes are believed to be originating with scammers based in West African countries like Nigeria and the Ivory Coast. The suspects typically pose as kids of similar age, often using a girl’s profile picture and even listing schools or adding friends to make it look like they live in the same area. It happens often on large platforms like Instagram or Facebook, but can also be on gaming or video chats, authorities said.

The alert is meant to thrust the issue into the public spotlight, so kids can feel more comfortable coming forward and adults can help them learn how to spot fake identities and reject anyone asking for explicit images, said Assistant Attorney General Kenneth Polite of the Justice Department’s criminal division.

The tactics used by those behind the fake accounts are getting more aggressive, sometimes asking for photos within minutes, and cases have been rising around the world, advocates said.

“This is a growing crisis and we’ve seen sextortion completely devastate children and families,” said Michelle DeLaune, CEO of the National Center for Missing and Exploited Children. “The best defense against this crime is to talk to your children about what to do if they’re targeted online.”